Friday Reads: Piecing Me Together by Renée Watson 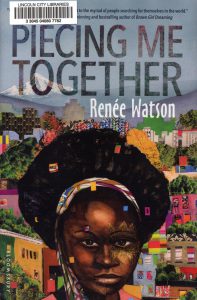 Jade (16) loves collage art and photography. She is a scholarship student at a mostly white prestigious private school and lives in what others consider a questionable area of Portland, Ore. She is invited to join the Woman to Woman program and if she stays with it for her last two years of high school she is guaranteed a college scholarship.

During her junior year Jade makes friends with Sam (Samantha) who rides the same city bus to school. It isn’t long before things begin to chafe her, how her new white friend makes excuses for prejudiced behavior and how she feels sometimes that the school, and even her mentor, Maxine (who is black), thinks she needs saving. She finally works on speaking up for herself. When she hears about a black girl at a pool party who was beaten by police, she has trouble dealing with it, but finally finds a positive way to respond (with others) and make a difference. Similar in some ways to The Hate U Give by Angie Thomas, which I will be reading next.

Piecing Me Together is the winner of the 2018 Coretta Scott King Author Award, as well as being named a 2018 Newbery Honor Book.  The Hate U Give received the 2018 William C. Morris Award for a debut book published by a first-time author writing for teens, was named a  2018 Coretta Scott King Author Honor book, and a 2018 Michael L. Printz Honor book.

Today I’m writing about a book I’m not done reading yet, because I already know I can recommend it—especially to any Nebraskan who wants to know more than they (might have?) learned in school about Malcolm X.

Manning Marable worked for years on “Malcolm X: A Life of Reinvention,” and it’s a book that combines extensive research with skillful storytelling and readability. Marable died shortly before the book was published in 2011. The book went on to win the Pulitzer Prize, and gathered both wide acclaim and bitter detraction.

It was a labor of love for Manning Marable, who was Director of Columbia University’s Institute for Research in African-American Studies (IRAAS), which is responsible for the The Malcolm X Project at Columbia University. Marable takes a more academic, yet still very readable, approach to the life of Malcolm X than the book you might already be familiar with, The Autobiography of Malcolm X, which was a collaboration between X and Alex Haley. If you’re not already familiar with that book, which came out in 1965 shortly after the death of Malcolm X, we have copies in our book club kit collection here, and it’s also recommended. It made the Nebraska 150 Books list.

Marable’s detractors fault him for being perhaps too eager to present details that the autobiography may have glossed over, enhanced, or simply left out. Each book has a different goal, to be sure, and to my mind it seems that the persona that is set forth in the autobiography was one that Marable accepted, and that he knew to be secure and strong in the minds of readers—and so his unexpected explorations are really a testament to his faith in the significance and consequence of Malcolm X as an individual. When you’ve centered so much of your professional life around someone’s legacy, as Marable did, especially when that someone is as complex as Malcolm X, appreciating and acknowledging that complexity is what separates dedication from devotion, or veneration from worship.

I can understand why such honesty might not seem refreshing, however, given the context of the current struggle for racial justice, whether it’s 1965, 2011, or 2018. There are plenty of other voices who can speak to this more eloquently and appropriately than I can. (I already have A Lie of Reinvention: Correcting Manning Marable’s Malcolm X [ed. Ball and Burroughs] checked out to read next, in order to better understand these objections.)

Of particular interest to Nebraskans, Marable’s book gives more context to the Omaha life of the family of Malcolm X than Nebraskans might know, and you’ll read disturbing details of KKK activity in Lincoln and Omaha in the early 1900s. This is a part of Nebraska history you also might not have learned about in school. To put that in some context, we’re coming up on the 100-year anniversary of the Omaha race riot of 1919, where a mob of white people stormed the Douglas County Courthouse and lynched a black man, Will Brown, awaiting trial for a crime he most likely did not commit. The mob also fatally wounded the Omaha mayor, Edward Smith. For more background on the event, see this recent addition to Nebraska Memories, and also this pdf from the Nebraska State Historical Society.