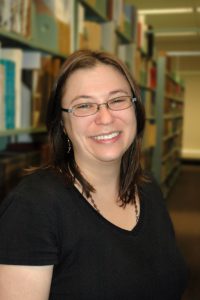 he year 2016 as the new cataloger for the Library Commission.

Allison is a fifth generation Montanan and comes to us with what she describes as a homestead work ethic: hardworking, rarely sedentary, and not taking modern conveniences for granted. She worked at several Montana institutions including the Montana State Library and the Montana State Historical Society. She most recently worked at the Montana Office of Public Instruction doing cataloging, interlibrary loan, collection management, and reference assistance. She received her BA in History from Rocky Mountain College and an MA in History from the University of Montana Missoula. While working as a historian for a research firm, she encountered library catalogs that weren’t particularly helpful nor were they the most efficient pathfinders so she started thinking about becoming a cataloger which required an MLS. Her choice for this education was the University of North Texas in Denton which could be achieved mostly online with a few in person classes.

When Allison is not at work, she is quite happy at home sitting on her deck, reading, watching television, or taking a walk. She also enjoys cooking and baking.  One of her signature items is butter brickle bars for which all of the ingredients are always on hand. Which books have influenced Allison the most? Two titles come to mind – Pride and Prejudice by Jane Austen because of Jane’s ability to see inside the human character and Isabelle Allende’s House of the Spirits. She read it the first time in high school and with each subsequent reading gleans something new. Allison feels books are like old friends worth reading again and again. When I asked Allison how she describes her workplace she said she feels like she’s always worked at the Library Commission and that it is a natural fit with the staff. There is an ease and respect amongst her colleagues. We are pleased to have Allison in Nebraska and at our library.