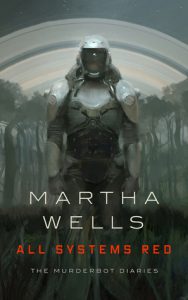 “As a heartless killing machine, I was a terrible failure.” Murderbot (as they call themself) is a part organic/part machine SecUnit (security unit) who is contracted out by The Company to various research and exploration teams traveling to other planets to keep them safe, and to keep an eye on what they’re doing. Unlike other SecUnits, however, this particular one has hacked their own (cheaply made) governor module so they no longer have to follow the Company’s strict protocols. Rather than turning against all humans or anything overly violent, Murderbot just wants to be left alone to watch thousands of hours of sci-fi/adventure soap operas and to do the bare minimum of work (just enough so no one realizes they now have free will). The current job includes a group of humans who are exploring a planet for scientific reasons that don’t matter much to Murderbot. This is a fairly easy job until equipment starts to fail, creatures start attacking, and vital pieces of information seem to be missing which puts the humans all in danger. Now they must find out who is behind the conspiracy and what’s going on, keep the humans safe from other (more heartless) robots, and get them all off of the planet while desperately trying to avoid more social interaction than is necessary. All Systems Red is the first novella of four in The Murderbot Diaries which all follow our snarky SecUnit. Quick reads with fast-paced stories, engaging characters, lots of snarky humor, cyborg/robot/human battles, and tentative friendships.
This entry was posted in Books & Reading and tagged #FridayReads, Friday Reads. Bookmark the permalink.