If it’s the end of the year, then it must be Hogswatch! 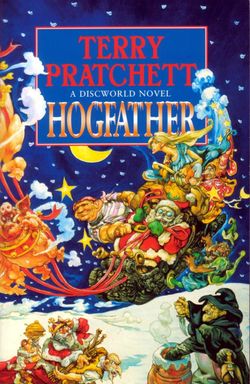 But, the Hogfather is missing! How can we have Hogswatch without him? Not to worry, Death is here to save the day, filling in for him so that all the children will still get their gifts. What could possibly go wrong?

Hogfather is the 20th book in Terry Pratchett’s Discworld series. And it’s one of the most entertaining, in my opinion. If you haven’t read any Discworld books yet, that’s OK. This one can be read on its own. There’s enough detail and explanation to understand what’s happening. But, for those of you new to this series, Discworld is a magical world, filled with witches, wizards, dragons, trolls, and dwarfs. Physically, it’s a flat disc, sitting on the backs of four enormous elephants, which are standing on the back of an enormous turtle slowly swimming through space. You will recognize some similarities to our world, but since it does have magic, things are quite different.

It’s almost Hogswatchnight, and while Death is keeping up with some of the Hogfather’s duties, there’s still the problem of what happened to him. Luckily, Death’s granddaughter Susan is also on the case. While Death is trying to ensure that people will keep believing in the Hogfather, she’s trying to find him. It turns out that there will be more serious problems than a lack of gifts without a Hogfather. Belief in him also happens to be important to keep other parts of the world working properly. In order to save the Hogfather and Hogswatch, Susan must deal with the “Oh God” of Hangovers, interfering wizards, the realm of the Tooth Fairy, and Mister Teatime, an assassin who insists that his name is pronounced ‘teh-ah-tim-eh’.

As with all of the Discworld books, Hogfather is both a comic fantasy and a satirical commentary on our world. But, this novel also deals with the nature of belief and how important it can be to us, whether we realize it or not. It’s the kind of book you will need to read more than once to absorb the depth and meaning of the storytelling.

If you’re looking for a really fun seasonal read that will restore your faith in humans, Hogfather is the book for you. HAPPY HOGSWATCH!