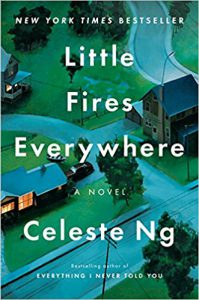 I heard Celeste Ng speak at a United for Libraries hosted author event a few years ago. At the same event, I received an advance copy of her book, Little Fires Everywhere. I enjoyed her remarks but I wasn’t especially interested in reading the book. The book has received a lot of attention since its publication. It is included on many best books of 2017 lists and it is now among three books on Lincoln City Libraries short list for One Book One Lincoln voting. During a recent and long road trip, I had a chance to listen to the audio version of Ng’s book. I wasn’t disappointed. Little Fires Everywhere begins with a house on fire and speculation about who is to blame. At the top of the list is the youngest family member – a non-conforming teen rebel. But did she do it and, if so, why? The setting is Shaker Heights, Ohio, and the story evolves from the developing relationships among members of two families – one long rooted in the community and prosperous, and the other (a mother and daughter) impoverished and living day to day under uncertain circumstances. Central are the two mothers – Elena Richardson, a local news reporter, mother of four and a well-connected community member, and Mia Warren, a mysterious artist and single mother of one. Connections evolve and conflict emerges as a result of the attempted adoption of a Chinese-American baby and an ensuing custody battle. In the background is Elena Richardson’s effort to uncover Mia Warren’s true identity. Lincoln’s three books selected for the all community read are all excellent choices. Celeste Ng’s book is worthy and notable. If chosen, it will make an interesting read and a great source for conversation. Little Fires Everywhere is Celeste Ng’s second novel. Her debut book is, Everything I Never Told You, an award winning best seller. Ng, Celeste. Little fires everywhere. (New York: Penguin Press) 2017.
This entry was posted in Books & Reading and tagged Friday Reads. Bookmark the permalink.