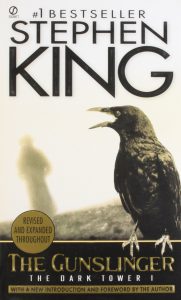 With the recent release of The Dark Tower movie, I decided to finally start reading the Stephen King series that the movie is based on. So far, I’ve only read the first book in the Dark Tower Series, The Gunslinger. I really liked the feel of the book, which was a mixture of locations – western? but with magic? far into our own future after a major unknown apocalypse? alternate history? parallel universe? Unfortunately, by the end of the first book, you still don’t know exactly where or when you are. So, of course now I’m hooked and have to continue reading to find out what’s really going on. Why is Roland, the last Gunslinger, chasing the Man in Black? Who is the Man in Black…really? What is the Dark Tower? Who is this strange boy Jake, who seems to know a lot about our reality and time, but seems to have some memory loss? Does he belong in this realm or ours? Although it is the first book in the series, The Gunslinger was a bit disjointed in introducing the characters, location, and plot. It felt like you should already know something about this place before reading this book, but you don’t. And it has an almost annoying ‘non-ending’, in that its tale isn’t resolved, so you do have to continue with the rest of the books to get the full story. Good job on sucking us in, Stephen King! Luckily, I was able to finish the book before I saw the movie. It was very interesting to match up the parts of the movie that came from the first book in the Dark Tower series. But, I did know that there were also parts of the movie that were pulled from other books in the series, so I kind of got some spoilers, but I don’t think any of them have ruined my desire to keep reading. I know the movie has received some bad reviews. But, after my reading of The Gunslinger, I think there is so much to the world of the Dark Tower, that it is just too difficult to squeeze it all into one film. That’s why I’m glad that there are talks about a TV series being done. I think that will do a better job of representing the books. I recommend reading the books and watching the movie. They are both similar and different from each other, and I enjoyed them each for what they are.
This entry was posted in Books & Reading and tagged Friday Reads. Bookmark the permalink.