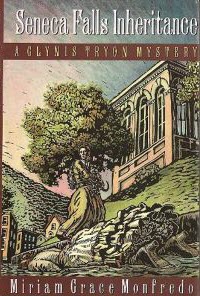 As a historian and former librarian, Monfredo definitely has the skills and knowledge to write a fun and clever historical murder mystery. The story takes place in 1848 in upstate New York State during the first Women’s Rights Convention, and is the first in a series featuring librarian Glynis Tryon.

The feminist in me loves this book for the independent Glynis, who has been asked by Elizabeth Cady Stanton to help organize the Women’s Rights Convention in Seneca Falls. The fact that Glynis is a librarian doesn’t hurt either. She’s a smart, stubborn, educated woman struggling to solve a woman’s murder in her small town. The New Yorker in me feels very much at home in Seneca Falls, a city I have actually visited myself.

I’ve re-read Seneca Falls Inheritance at least three times now, and I still find it both educational and entertaining. There are five more titles in this series, so once you’re hooked on Glynis and her adventures, there’s plenty more to read.