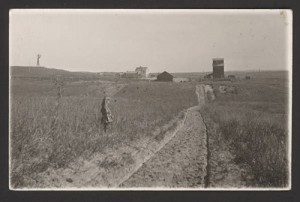 In early January, I moved from Montana to Nebraska. This is not necessarily the best time of the year for a road trip. It’s cold. It’s bleak. Fortunately, my mom decided to make the trip with me.  We entertained ourselves by talking about the landmarks, odd formations, and abandoned structures we glimpsed along the freeway. For example, as we drove from Scottsbluff to Lincoln, we saw a lot of windmills. It seemed like there were windmills popping up all over the place. Looking for windmills helps make that last leg go a little faster! Now, we have windmills in Montana. We even have a few wind farms, but you do not see a lot of windmills standing alone in a field. Most are adjacent to a farmhouse or a barn, and may still be operational. For those living off the grid, windmills serve as an excellent power source.  Wanting to see

more of Nebraska’s windmill heritage, I searched Nebraska Memories for images and publications. As you may know, homesteaders used windmills to convert wind into energy that could be used to pump water wells.  In areas where there are few rivers, it makes sense that farmers and ranchers used the energy generated by windmills to bring water to the surface.  Looking through Nebraska Memories, I found a few photographs of windmills. However, rather than featuring a solitary windmill in a field, most of the images depicted windmills standing adjacent to a homestead or lurking in the background.  This makes sense. After all, the windmills my mom and I glimpsed as we sped across the Nebraska plains were the remains of abandoned homesteads.