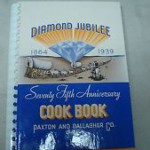 This week we received, as a gift, a copy of the Paxton & Gallagher 75th Anniversary Diamond Jubilee Cookbook, 1864-1939.  It has been wonderful to leaf through the recipes and handwritten notes, and wonder about the company who produced them, as well as the many cooks who used them. As it turns out, there are several pictures related to Paxton & Gallagher in Nebraska Memories, so here is a brief history of the company and its’ founders: Paxton & Gallagher Wholesale Grocery was founded in 1879 by two Omaha businessmen: Ben Gallagher and William A. Paxton, and in a few short years became one of the largest grocery companies in the West.   Paxton started out as a cattleman, then became a banker who had his hand in many different businesses in Omaha and Nebraska.  Examples of Nebraska Memories pictures of some of his ventures are, from left to right: The Paxton Hotel, the Paxton & Vierling Iron Works, and the Nebraska Telephone Company (in which Paxton was a principal stockholder). 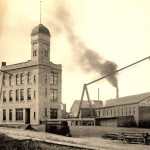 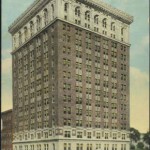 Gallagher, on the other hand, was a grocery man only, and previously operated a series of general stores all along the Union Pacific railroad route. The original Paxton & Gallagher store was located at 15th and 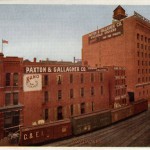