“Somewhere the saving and putting away had to begin again and someone had to do the saving and keeping, one way or another, in books, in records, in people’s heads, any way at all so long as it was safe, free from moths, silver-fish, rust and dry-rot, and men with matches.” 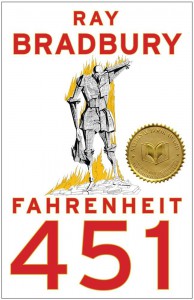 I find it somewhat hard to believe that I haven’t read Fahrenheit 451 until now. In addition to its status as a classic, it would seem that, given, my chosen profession, I’d have managed to read it already. As the above quote illustrates, the message of this book should appeal to librarians.

Before I started reading this book, I was familiar with the general premise, a dystopian future in which books are outlawed. The book’s protagonist is Guy Montag, who works as a fireman. In this future society, firemen don’t put out fires; they set them, in order to burn illicit books. Montag becomes increasingly dissatisfied with the state of the society in which he lives, and he takes steps to oppose the status quo.

I’ve been very pleasantly surprised at how much I’m enjoying finding out all the details of this book that has existed in my consciousness only as a cultural icon all this time. I think it is very well-written, and I love Bradbury’s prose. Although the book was originally published in the 1950s, I find many of its descriptions of everyday life and technology very similar to our current society. Reading about how, instead of interacting with one another, people focus their attention on televisions that take up three walls of their living rooms and constantly listen to earphones made me feel guilty about the amount of time I spend mindlessly using my TV, tablet, and iPod. (However, I did use my iPod to listen to this audiobook, so maybe electronic devices are not all bad!)

The particular audiobook I am listening to is narrated very well by actor Tim Robbins, which adds to my enjoyment. Robbins does a great job of bringing Montag to life and provides distinguishable, believable voices for the supporting characters.

One Response to Friday Reads: Fahrenheit 451 by Ray Bradbury