This Strange Wilderness: The Life and Art of John James Audubon to Represent Nebraska at National Book Festival

This Strange Wilderness: The Life and Art of John James Audubon to Represent Nebraska at National Book Festival

The Nebraska Center for the Book selected This Strange Wilderness: The Life and Art of John James Audubon by Nancy Plain (University of Nebraska Press, 2015) to represent Nebraska at the 2017 National Book Festival. The book is the state’s selection for the National Book Festival’s “Discover Great Places through Reading” brochure and map. Each state selects one book about the state, or by an author from the state, that is a good read for children or young adults. The brochure and map will be distributed at the Festival on September 2 and featured in the “Great Reads about Great Places” links on the websites of both the National and Nebraska Centers for the Book. 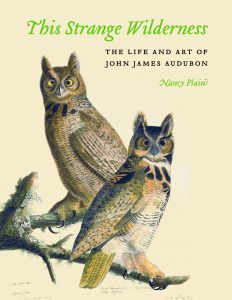 This book brings together the amazing story of the career of John James Audubon (1785–1851), founder of modern ornithology and one of the world’s greatest bird painters, and the beautiful images that are his legacy. It details his art and writing, transporting the reader back to the frontiers of early nineteenth-century America. Nebraska’s “Great Reads about Great Places” book is chosen from the previous year’s Nebraska Book Award winners and this book was awarded the 2016 Nebraska Book Award in the Children/Young Adult category. Entries for the 2017 Nebraska Book Awards will be accepted until June 30—see http://centerforthebook.nebraska.gov/awards/nebookawards.html.

The National Book Festival will feature presentations by award-winning authors, poets, and illustrators at the Walter E. Washington Convention Center in Washington, DC. Festival attendees can meet their favorite authors, get books signed, have photos taken with mascots and storybook characters, and participate in a variety of learning activities. States will staff exhibit booths to promote reading, library programs, and literary events. Find out more about the 2017 National Book Festival (including a list of featured authors) at http://www.loc.gov/bookfest.