Tag Archives: 2019 One Book One Nebraska 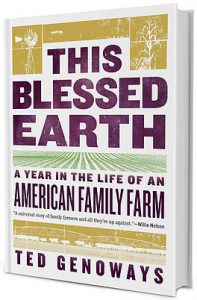 Ted Genoways spent a year following a Nebraska farm family – the Hammonds – and writes about his experiences and observations in his book, This Blessed Earth. Rick Hammond and his family raise soybeans, corn, and cattle on their fifth-generation farm near York. Genoways has said that the book intends a “kind of farm-level understanding of the systems that currently exist.” Genoways captures the challenges of farming and life experienced by this one farm family and, more generally, others.

Genoways, a Nebraskan with long-standing family ties to farming, underscores the fact that farming is a huge gamble. In part, it is a matter of living with the uncertainty of weather, the unpredictability of global markets, federal farm policies, finances and more. These and many other challenges determine whether farming income exceeds expenses, falls below, or breaks even. A sudden storm, a downward turn in the markets, equipment breakdowns, and other unexpected events can change prospects dramatically.

Today’s farms are remarkably different from those of previous generations – farms covering thousands of acres, large and expensive tractors, and other equipment with computer screens, and GIS technology to determine spacing and measurement of soil moisture.

A bonus is the historical content and commentary that Genoways provides. Genoways writes about plant science, hybrid seeds, chemicals, water rights, irrigation, and much more. I grew up on a northeast Nebraska farm, decades ago. We raised soybeans among other crops. I had no idea that Henry Ford’s leadership, research, and initiatives were critical in the soybean becoming the dominant agricultural commodity that it is. Genoways details Ford’s recognition of the potential of the soybean for manufacturing and other byproducts. Genoways writes in-depth about Nebraska’s water resources, needs, vulnerability, policies, and management.

Beyond their hard work and self-reliance, farmers must have multiple skills – the ability to fix what is broken, the knowledge to grow and manage crops, the judgment to know when to plant and harvest, to raise and care for livestock, and the intellect to know when to buy and sell.

This Blessed Earth has received much-deserved recognition. It is the book selected by both Iowa and Nebraska for the two states’ 2019 statewide reading programs – All Iowa Reads and One Book One Nebraska. It is among the Smithsonian’s “Ten Best History Books of 2017” and it is the prizewinner of the Stubbendieck Great Plains Distinguished Book Award presented by the Center for Great Plains Studies.

Ted Genoways is a Nebraska book Award winner for both poetry (Bullroarer: A Sequence) and nonfiction (The Chain).

Genoways will speak at the Nebraska Book Festival on September 7.

“This Blessed Earth” Chosen as 2019 One Book One Nebraska

This Blessed Earth: A Year in the Life of an American Family Farm
Chosen as 2019 One Book One Nebraska

People across Nebraska are encouraged to read the work of a fourth-generation Nebraskan —and then talk about it with their friends and neighbors. This Blessed Earth: A Year in the Life of an American Family Farm (W. W. Norton & Company, 2017) by Ted Genoways is the joint 2019 One Book One Nebraska and All Iowa Reads selection. 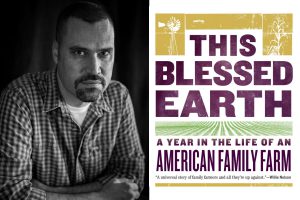 This Blessed Earth asks the question, is there still a place for the farm in today’s America? The family farm lies at the heart of our national identity, yet its future is in peril. Far from an isolated refuge beyond the reach of global events, the family farm is increasingly at the crossroads of emerging technologies and international detente. Ted Genoways explores this rapidly changing landscape of small, traditional farming operations, mapping as it unfolds day to day.

For forty years, Rick Hammond has raised cattle and crops on his wife’s fifth-generation farm. But as he prepares to hand off the operation to his daughter Meghan and her husband Kyle, their entire way of life is under siege. Confronted by rising corporate ownership, encroaching pipelines, groundwater depletion, climate change, and shifting trade policies, small farmers are often caught in the middle and fighting just to preserve their way of life. Following the Hammonds from harvest to harvest, This Blessed Earth is both a history of American agriculture and a portrait of one family’s struggle to hold on to their legacy.

Libraries across Nebraska will join other literary and cultural organizations in planning book discussions, activities, and events that will encourage Nebraskans to read and discuss this book. Support materials to assist with local reading/discussion activities will be available after January 1, 2019 at http://onebook.nebraska.gov. Updates and activity listings will be posted on the One Book One Nebraska Facebook page at http://www.facebook.com/onebookonenebraska.

2019 will mark the fifteenth year of the One Book One Nebraska reading program, sponsored by the Nebraska Center for the Book. It encourages Nebraskans across the state to read and discuss one book, chosen from books written by Nebraska authors or that have a Nebraska theme or setting.