Friday Reads: The Sound of a Wild Snail Eating by Elisabeth Tova Bailey

“I found a snail in the woods. I brought it back and it’s right here beneath the violets …” 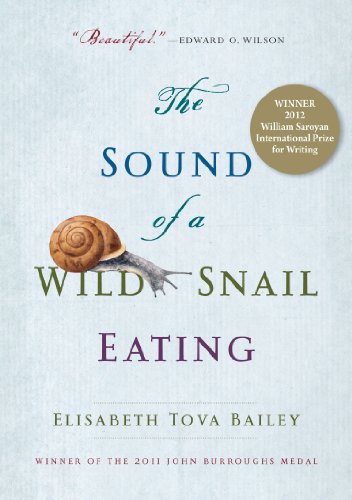 This is the first question Bailey asks of the snail in her book, The Sound of a Wild Snail Eating, in which she recounts her survival through a debilitating relapse of her chronic illness. Once a traveler and gardener, she is rendered bedbound and alone, save for the occasional visits of loved ones and her caregiver. And then she is gifted the company of a wild woodland snail, brought from its habitat with a friend’s potted offering of wild violets.

As it so happens, the snail is alive, and its motion and unique liveliness breathes purpose into Bailey’s stalled life.

The Sound of a Wild Snail Eating is a small book. Its pages number at 170; 191 if you count the acknowledgements and bibliography. It’s a quick read that gets technical at times but never becomes wholly inaccessible. Its style, complete with pages dotted here and there with monochrome drawings of snails, is a tribute to the 19th century naturalists of whom Bailey seems fond, and she follows in their footsteps – or, rather, to borrow her imagery, she glides along the slime trail they left behind.

Bailey draws from scientific literature and poetry in rhythm with her observations, making the book one-part informative essay and one-part ode. Peppered in between discussions of the snail’s locomotion, diet, and evolution are the chronicles of her illness, told in an almost tangential fashion, secondary but parallel to the snail’s life, where she both wishes to be more like the snail and longs to feel human again. Is it alive, she asks of the snail and its stillness during their first introduction. Am I alive, she seems to ask; or, the darker question that lingers, one with an answer she couldn’t know, will I survive this?

The Sound of a Wild Snail Eating is best enjoyed in the perfect stillness that might allow oneself to overhear a snail at its dinner. Bailey asks the reader to slow down and ponder – and wonder – at nature and its small, unnoticed creatures and their tiny, significant lives. The reward for your patience is a quiet sort of jubilation and a feeling of hopeful resilience.

Bailey invites us to consider the snail and, in doing so, asks if we might also see ourselves.