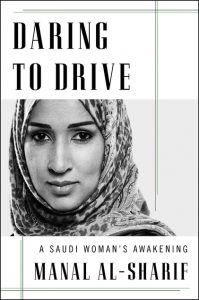 Daring to Drive is the memoir of Manal al-Sharif, a Saudi Arabian women’s rights activist who spent time in prison after participating in the 2011 Saudi women’s driving campaign. While the first two and final four chapters focus on her driving activism, the middle eight are a chronological account of her life, beginning on April 25, 1979, the day of her birth. In my view, the real drama of the narrative is in seeing how al-Sharif transforms from a young girl, strictly controlled by Saudi custom and a fundamentalist version of Islam, to a woman who challenges the status quo at great personal cost.

One value in reading an account like al-Sharif’s is the window it provides into the restrictive, brutal nature of Saudi life, especially for women. In Saudi Arabia women are completely dependent on male guardians (usually fathers or husbands) or on mahrams (male relatives whom they cannot marry, such as brothers, uncles, or even sons) to accompany them on any official business. To illustrate her point that in Saudi eyes “death is preferable to violating the strict code of guardianship and mahrams” (7), al-Sharif cites several cases where women died when male paramedics weren’t allowed to treat them because their guardians or mahrams weren’t present. And of course, women couldn’t drive, even if, like al-Sharif, they owned cars and had foreign driver’s licenses. (Note: Authorities finally lifted the ban on women driving on June 24, 2018.) Instead, women relied on, and frequently suffered harassment by, male taxi drivers or “an informal network of men with cars who illegally transport female passengers” (9).

For the most part, the cultural landscape al-Sharif describes appears quite alien. Occasionally, though, one feels an uncomfortable flicker of familiarity. For example, on the topic of harassment al-Sharif writes “the authorities . . . always blame the woman. They say she was harassed because of how she looked or because of the way she was walking or because she was wearing perfume. They make you the criminal” (11). al-Sharif’s decision to wear a hijab, which left her face uncovered, instead of a niqab, in public was seen by men as an invitation to shout slurs, like “whore” and “prostitute,” at her. The degree of coverage hardly seemed to matter though, as even a woman who left only her eyes exposed was reportedly told by religious police to cover them because they were “too seductive” (234).

So what allowed al-Sharif to reject the shackles of her culture? To achieve a broader perspective on Saudi customs and fundamentalist beliefs? After reading her memoir, I’d say that, in addition to innate curiosity, it was education, internet access, and exposure to people from other parts of the world – exactly the things repressive regimes and conservative religions invested in maintaining the status quo typically fear.

al-Sharif grew up with a mother who prioritized education for both her daughters and her son. And even though the schools al-Sharif attended growing up initially fanned the flames of her extremist religious beliefs, her academic achievements ultimately got her accepted to King Abdulaziz University in Jeddah. There, she received a small monthly allowance from the school, which gave her a first taste of financial independence. She also had her radical religious beliefs tested for the first time by fellow students who didn’t follow all the same practices she did. Perhaps most importantly, she signed up for internet access in order to complete and submit her homework. Though her original intent had been to avoid reading anything that might undermine her beliefs, she ultimately couldn’t resist exploring political analysis, world news, and diverse opinions. “Nothing,” she wrote, “did more to change my ideas and convictions than the advent of the Internet and, later, social media” (132-133).

Finally, after graduating, her university degree got her a  good job at Aramco, the Saudi state oil company, where she worked with not only Saudi men, but also foreigners. In 2009, as part a professional exchange program, she got to live and work in the United States for a year. During this time abroad, she learned to drive, got a New Hampshire driver’s license, and rented a car at company expense. She went skiing and skydiving, got a public library card, attended a play in which two men kissed, learned about Rosa Parks and the civil rights movement, took up photography, and befriended a Jewish woman, none of which she could or would have done in Saudi Arabia. Her year in the United States was definitely a turning point for her; though she went back to Saudi Arabia at the end of it, she returned a completely different person. As she writes, “ the true culture shock occurred not when I landed in America, but much later, after I had returned home” (203). This is when her activism began in earnest.