Friday Reads: The Wrecking Crew: The Inside Story of Rock and Roll’s Best-Kept Secret 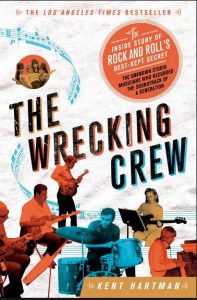 A little while ago, I had just finished reading The Wrecking Crew: The Inside Story of Rock and Roll’s Best-Kept Secret and I was listening to a story on NPR about music students attending the Berklee College of Music in Boston. Ironically, the story highlighted current student musicians that were contributing to the music world in a way quite similar to the wrecking crew of the 1960’s and 1970’s. You see, the original wrecking crew was a collection of backup (or maybe background would be a more appropriate word) musicians that played on numerous studio recordings. Like the Berklee music students, the wrecking crew played on jingles, theme songs, film scores, and commercials (the Berklee students have expanded to playing music for podcasts, video games, and other things).

So The Wrecking Crew documents the lives of these studio musicians, how they started and expanded in the business, and their interactions with some of the writers, producers, arrangers, and other notable artists. These include, among others, Brian Wilson, Sonny and Cher, Simon and Garfunkel, John Lennon, Frank Sinatra, and the Mamas and the Papas. While one of the more well-known members of the crew was Glen Campbell (who also toured as one of the Beach Boys), the book also focuses on drummer Hal Blaine and guitarist Carol Kaye (shown here hilariously giving Gene Simmons a lesson on bass). Incidentally, the name wrecking crew, penned by Hal Blaine, is disputed by Carol Kaye, who mentions that the group of musicians weren’t generally known as such (but sometimes called “the Clique”). Call them whatever you choose, but this set of musicians were the go-to’s when it came to studio recording, and the point is that the work was good enough for them to earn a living doing it. Most of the recorded music you hear from this time has these musicians playing on it instead of the actual bands that toured. And the kicker is that you would never know it; most of the time (if not all of the time) they weren’t credited.

The book also offers an interesting insight into many of the colorful (both in a healthy creative way and sometimes controlling and abrasive) characters in the music world at the time. For the creative but meticulous, think Brian Wilson. For the controlling and abrasive (and sometimes downright crazy), think Phil Spector. The Wrecking Crew offers access into not only these major artists but also those behind the scenes. A documentary film about the Crew, based on the book, may also be of interest (some of the original footage illustrates things in a worthwhile way).