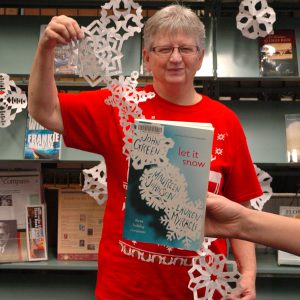 Three stories, or novellas, by three different authors are interconnected in a satisfying way and will appeal to teens and adults. The first story is “The Jubilee Express” by Maureen Johnson. It is about Jubilee (or Julie when she doesn’t want to explain her name) and her sudden, unexpected trip to Florida to visit her grandparents. En route she is stranded in Gracetown when her passenger train runs into a pile of snow during a Christmas Eve blizzard. It makes sense to leave the train for the warm, inviting Waffle House just in view. “A Cheertastic Christmas Miracle” by John Green is the second story.  Tobin will spend Christmas with his two friends as his parents are stuck in Boston due to the blizzard. Then another friend calls from the Waffle House that there are 14 cheerleaders there from the stranded train and a couple more guys are needed (but not too many more!). The third story, “The Patron Saint of Pigs” by Lauren Myracle tells of Addie, who recently cheated-on and felt she had to break-up with her boyfriend, and is in despair. Her two best friends are not letting her dwell in her misery and insist she try to think of others instead of just herself. So she decides to be someone else’s “angel” as penance for her mistake. How does this all come together?  While romantic and festive, the stories are not sugary sweet and the separate plots are brought to heartwarming and gratifying conclusions.  As Booklist noted, “A delightful read any time of the year.” (9/5/08) Does this sound like a good choice to you?  This is a title you can find in our Book Club Kits.   Reserve it for your book club for something light, yet also substantial. Green, John,  Maureen Johnson, and Lauren Myracle. Let It Snow. Speak, 2008.
This entry was posted in Books & Reading and tagged Friday Reads. Bookmark the permalink.