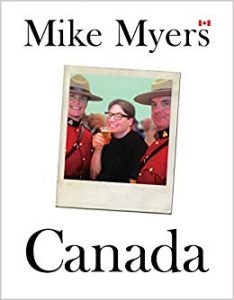 This title came to my attention on July 1st aka Canada Day as the daily special from Audible. I was intrigued, downloaded the title, and eagerly began listening. It helps that the author of whom I have long been a fan reads this title.

Myers begins with the premise that Canada lacks a mission statement. The country promises to provide good government and a safe place to live but is that enough? The inevitable comparisons to life in the United States make up a great deal of content. He compares regional colloquialisms, health care, the love of hockey, and the government supported CBC to their American counterparts. The United States does not propagate information about Canada so there may be many episodes in Canadian history that will be new information. To drive this point home, when my curiosity was piqued for the Prime Minister Pierre Trudeau, father of the current Prime Minister Justin Trudeau, I looked for books to read more about him from my local library, but there were none.

Mike Myers was born to two Liverpudlian parents who immigrated to Canada for better employment opportunities. English parents making a life in Canada caused a clash of culture. Mike shares how the values of his parents and the humor of his brothers Peter and Paul shaped his worldview and brand of comedy. One of the attributes of his father in often-difficult situations was a non-rhetorical question of “how can we make this funny?”

Mike shares how his character Wayne Campbell (Wayne’s World) is a quintessential Canadian creation, specifically from the Scarborough district of Montreal, dissecting everything from his language to his name. Other Saturday Night Live characters also owe their origin to Mike’s Canadian and British upbringing.  With Canadian, British, and United States Citizenship, it’s clear that Mike Myers is a very proud Canadian patriot despite being an expatriate.