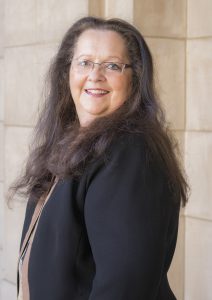 JoAnn McManus (nee Jedlicka) was recently selected as a co-recipient of the Library Commission’s state of Nebraska Excellence in Leadership recognition award. She joined the Nebraska Library Commission in 2010 to work on the Library Broadband Builds Nebraska Communities Project funded through the Broadband Technology Opportunities Program (BTOP). Currently, she is working with the Library Innovation Studios Project (funded through an IMLS grant) with a team of Library Commission staff. JoAnn grew up on a farm just outside of Schuyler, NE and is one hundred percent Czechoslovakian.  She graduated from Schuyler Central High School and is the youngest of thirteen children. Her mother was also from a family of thirteen. JoAnn was named after her first cousin, who was a child movie star named JoAnn Marlowe (Mares) who’s most famous picture was Mildred Pierce amongst the ten to her credit. JoAnn earned a Bachelor’s Degree in Business Administration from the University of Nebraska at Kearney and is a Graduate of the Economic Development Institute from the University of Oklahoma.  She also completed coursework in Grant Writing and Research from the University of Nebraska at Omaha. JoAnn has held various positions, many in the economic development field and almost all in the area of project or grants management.  Most of the organizations JoAnn worked for served counties throughout the state including NPPD, Nebraska Departments of Economic Development, and the Nebraska Department of Labor so JoAnn has done her share of traveling to Nebraska communities. JoAnn says the most challenging thing about her current assignment is that there is so much to do in a concentrated amount of time especially in the first few months. Luckily there are others on the team that are going through these same challenges to move the project forward.  The best thing about working with librarians is serving Nebraska in a different way than in her former jobs, If JoAnn could have dinner with anyone she would like to dine with Warren Buffett and should a winning lottery ticket find its way to her possession, she would retire and begin traveling with Hawaii and Ireland being top of her list. When she is not working at the Commission, JoAnn enjoys going to estate sales and is drawn to buying pretty objects. She has one case and two booths at the Aardvark Antique Mall and her family is always surprised when what looks like a useless purchase actually sells.  JoAnn won’t be quitting her day job anytime soon, selling ‘treasures’ pencils out as more of a hobby. JoAnn is married to Brian McManus and together they have a son Daniel. They also share their home with one cat named M&M. A perfect day would include spending time with her family enjoying adventures together. Congratulations JoAnn!