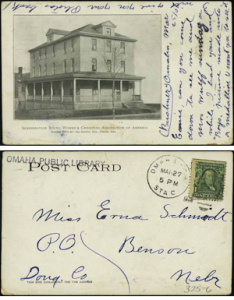 When looking at old postcards in Nebraska Memories have you noticed that some of them have writing on the front of the card or that there is a lot of white space around the picture on the postcard? This may be because in the early days people were not allowed to write a message on the back of the postcard next to the address. The Smithsonian Institution provides a nice history of postcards starting in 1861 when the US Congress passed an act that allowed privately printed cards to be sent in the mail.

Later legislation passed in 1873 allowed the government to produce postcards with a message on one side and an address on the other side. These government postcards could be mailed for 1¢ however privately created postcards cost 2¢ to mail. In 1898 the prices were changeed so all postcards required just a 1¢ stamp. Other laws were enacted between 1898 and 1906 that changed the requirements on what information must be printed on the back of a postcard however; people were still not allowed to write a message on the back of the card next to the address. Americans were finally allowed to write on the backside of the postcards in 1907. According to the 1906 Post-Office Department Annual Reports for the Fiscal Year ended June 30, 1906, this change came about after the meeting of the Universal Postal Union that took place in Rome. After a bit of research, I learned that Universal Postal Union (UPU) is the international organization that sets the rules for international mail exchange. The UPU was established in 1874. 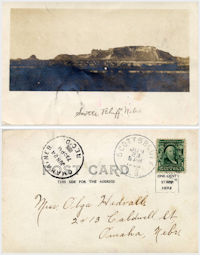 The change to allow writing on both sides of the card came about because of public request. Folks did not want to write a message on or next to the images on the front side of the cards. European countries were the first to make this change. Starting on October 31, 1906 the US Post Office started allowing postcards mailed from foreign countries to be delivered in the US with writing on the back. On March 1, 1907, the US Post Office allowed postcards mailed domestically to have written messages on the left side of the card next to the address. If you read the original text in the 1906 US Post  Office report, you will see that they refer to the side of the postcard that contains the address to be the front of the postcard. This period between 1901 and 1907, when folks were not allowed to write on the back of the postcard has become known as the Undivided Back Period. All of the postcards included in this post are from Nebraska Memories and examples from the Undivided Back Period. Looking at the back of these postcards, you will see that all of them contain a printed message that makes it clear that the only thing that can be put on the back of the postcard is the address. 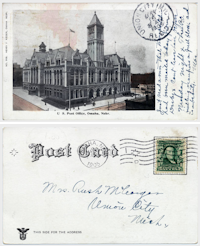