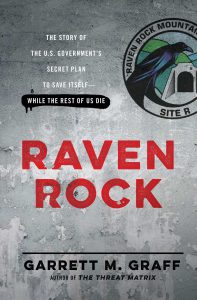 I had high expectations for Raven Rock: The Story of the U.S. Government’s Secret Plan to Save Itself—While the Rest of Us Die. I became interested in the book after listening to an engaging interview with the author, Garrett Graff, on NPR’s Fresh Air. Unfortunately, the book didn’t live up to my expectations. Don’t get me wrong, there is some good stuff here. But generally I found the middle part of the book to be a repetitive bore. Raven Rock picks up during World War II, when the U.S. was heading full throttle into the atomic age, with Harry S. Truman President of the United States. While there are many facets to Raven Rock, Graff primarily describes the aftermath of the atomic bomb deployment prior to the cold war, subsequent U.S. government preparations for doomsday, and other disaster planning. The book provides a chronology by each president after Truman. I found the first few chapters to be of interest (Truman and Eisenhower), then the beginning of aforementioned lackluster, drawn out, and sleepy sections, then heating up again around September 11, 2001 (Bush 43).

I think one of the challenges for Graff was getting his hands on information that wasn’t classified. This might explain why the reader has chapter after chapter devoted to the 50’s and 60’s time period, yet less than 2 pages devoted to President Clinton. Raven Rock, named after the massive Raven Rock Mountain Complex (also known as Site R), is an underground military nuclear bunker carved into the area’s greenstone granite, and located about 6 miles north of Camp David. It is basically an underground city, complete with offices, communications centers, bomb blast doors, dining facilities, an infirmary, bathrooms, etc. Speaking of Camp David, Graff provides an interesting narrative about the history of it (formerly known as Shangri-La). One of the appealing aspects of Raven Rock is these sorts of anecdotes, and I wish Graff devoted more attention to them. A few highlights include Graff’s descriptions of code names used for government officials and their family members, and the challenge to deciphering them on radio transmissions. Example: “Volunteer will reside at VALLEY for an indefinite time. I repeat: VOLUNTEER will reside at VALLEY for an indefinite time. VICTORIA requests that VENUS will go to VALLEY with agent” actually meant that Lyndon Johnson (VOLUNTEER) will reside at his private residence at The Elms (VALLEY), and Lady Bird (VICTORIA) requests that Luci (LBJ’s daughter, VENUS) will go to The Elms (VALLEY) with an agent. Also, the fact that up until at least 1910, tourists could sit at the president’s desk in the White House, and as Vice President, Lyndon Johnson’s phone number was listed in the phone book. Another anecdote describes a curious exchange between Chief Justice Earl Warren and officials who distributed a Mt. Weather entrance ID card to him but not Mrs. Warren. In our self-centered world of today, you have to appreciate the Chief’s returning the card, sarcastically saying:

“Then I suppose I should call my wife and say, ‘Honey, there is an atomic bomb attack to be made on Washington, and I am flying to safety in Appalachia. Sorry I don’t have time to come home and say good-bye, but it was nice to have met you.'”

Raven Rock is one of a number of emergency operations centers for the government, along with Mount Weather in Virginia, and Cheyenne Mountain in Colorado. But Graff’s Raven Rock is about much more than the construction and maintenance of these facilities; it’s about government disaster, succession, and “COG” or continuity of government planning — the principle that government continues to operate in the case of a catastrophic event. Granted most of this centers around the cold war, but on September 11, 2001, it took a much different turn. As Graff points out, September 11 exposed a clustered mess of communications problems and other assorted government disarray. Graff also devotes quite a bit of attention to the nuclear “football”. While the football doesn’t explicitly contain launch codes, “one military aide compared it to a Denny’s menu. You can go through and point at different pictures and that’s the type of nuclear war you would order. …”

All in all, Graff provides an interesting narrative of how the government’s plans have evolved over time to adequately handle these sorts of real and potential doomsday type disasters. Graff points out some of these failures along the way, but also interesting facts that most readers likely are unaware of. Just skip the middle third of the book.