Friday Reads: “Hero of the Empire: The Boer War, a Daring Escape, and the Making of Winston Churchill” by Candice Millard 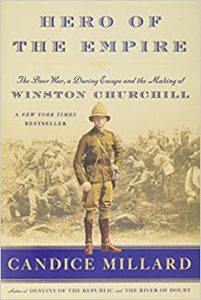 Candice Millard, author of River of Doubt (2005) and Destiny of the Republic (2011), is one of my favorite nonfiction authors. Her latest book, Hero of the Empire, is about Winston Churchill and, like many previous biographies of the famous Prime Minister, it focuses on a specific period in his life—his participation in the Boer War (1899–1902) instead of on its entirety. Examples of other focused explorations include last year’s Masterpiece Theater premier, Churchill’s Secret. This drama is set during Churchill’s second term as Prime Minister, when the 78-year-old leader (played by Michael Gambon) struggled, with the help of his wife, to conceal a debilitating stroke and an incapacity to govern. The popular Netflix miniseries The Crown cast 6’4” actor John Lithgow for its version of 5’6” Churchill during the early reign of Queen Elizabeth, revealing the private relationship between a PM and  a young Sovereign. Yet another biography is a 2010 documentary entitled Walking with Destiny, in which historian John Lukacs explains that “Churchill may not have won the War in 1940, but without him, the War most certainly would have been lost.”

In Hero of the Empire: The Boer War, a Daring Escape, and the Making of Winston Churchill, Millard describes the bravado of a young man who both wants and needs to go to war in hopes of gaining medals and fame as capital for his future political career. Churchill agrees to be a war correspondent in South Africa’s Boer War, where the British were both overconfident and under prepared.  When the train Churchill is traveling in is ambushed and derailed by Boer troops, Churchill calmly rallied British troops under enemy fire to clear the track and let the engine get away with the wounded. Most of the remaining British, along with Churchill, were captured. This was the first time in his young life he was not in control of his own destiny. It is his spectacular escape, with the help of several kind strangers along the way that helps him to become a hero who rejoins the British troops both as an officer and a war correspondent.  In a 2003 PBS Documentary entitled Churchill, this entire story is recounted in one sentence.

With my interest in Churchill piqued by Millard’s book, and inspired to learn more, I ran across this intriguing quote from Pamela Plowden, the woman he was in love with before he married his beloved wife Clementine and with whom he maintained a lifelong friendship. She described Winston this way:  “When you first meet Winston, you see all his faults. You spend the rest of your life discovering his virtues.”  This is where I find myself in the last pages of Millard’s text – having been introduced to a multitude of his shortcomings but also seeing glimmers of his many redemptive qualities. Certainly his charisma and masterful public speaking skills are shown throughout his life and his place in history is one to be both reckoned and respected.

What makes Millard one of my favorite authors is her ability to create a cinematic and fascinating description of events that ordinarily might not compel me and dialog that is on par with some of my favorite screen writers. One of her Amazon reviewers pleads for this text to be turned into a movie. As Hollywood frequently adapts books for cinematic creations, I would imagine Millard’s titles will most certainly be adapted and yet another actor will be cast to play this iconic man of history.

Millard, Candice. Hero of the Empire: The Boer War, a Daring Escape, and the Making of Winston Churchill. New York: Doubleday, 2016