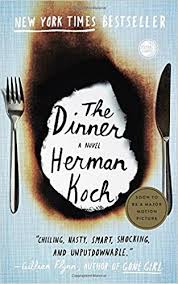 The Dinner, published in 2009, involves the relationships among two brothers, their wives, and teenage children. The story centers on a dinner at an upscale Amsterdam restaurant. This dark and disturbing book unfolds steadily with unpredictable twists, pivots, and surprises. Paul Lohman, the narrator and one of the two brothers, offers caustic observations throughout the dinner. Here’s a sample:

“So when the bartender at the café put our beers down in front of us, Claire and I smiled at each other in the knowledge that we would soon be spending an entire evening in the company of the Lohmans – in the knowledge that this was the finest moment of that evening, that from here on it would all be downhill.”

The meal and conversation are frequented with disruptions and flashbacks. It is eventually realized that the purpose of the dinner is to discuss the two couples’ teenage boys and their involvement in a brutal and criminal act. The parents’ dilemma is the moral choices that must be made. The tragic incident has special consequences for one of the brothers, a popular and powerful politician with ambitions for higher political office.

Herman Koch, the author, is a Dutch writer and actor. His writing includes short stories, novels, and columns. His most recent book is Dear Mr. M: A Novel.

A movie based on the book was released in May 2017 with starring roles by Richard Gere, Steve Coogan, Rebecca Hall, and Laura Linney.