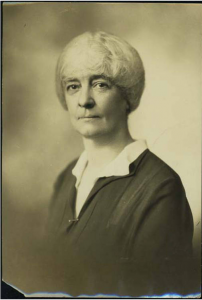 Whenever I see an antique portrait of a person either in an antique store or online, I always wonder who they were. With over 900 portraits in Nebraska Memories, there are plenty of them for me to wonder about. In Nebraska Memories, the amount of information that is provided about each person depends on many factors including where the photo came from and what information was written on or attached to the photo. I thought it might be fun to pick a portrait and see if I could learn more about the person. I looked at a few different portraits and decided to research Jessie M. Towne.

The portrait of Miss Jessie M. Towne is part of Omaha Public Library’s collection. The record for Miss Towne provided me with some great information to start my research. She worked at the Omaha Central High School for over 40 years retiring in 1930. She was a teacher, dean of girls and an assistant principal. I also learned that her father was Solon R. Towne. He was a health inspector and ornithologist.

I started my research by searching the US Census in the MyHeritage Library Edition database. (MyHeritage is a genealogy database that is available to all Nebraska residents at no cost through NebraskAccess.) Here is some of the information I found from looking at multiple censuses. 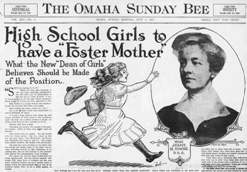 Next, I searched another one of my favorite sites, the Library Of Congress’s Chronicling America: Historic American Newspapers collection. The first article I found was “High School Girls to have a “Foster Mother”.” It appeared in the July 4, 1915 issue of the Omaha Daily Bee and talked about how she was recently appointed D.O.G. D.O.G. stands for Dean of Girls. Miss Towne looks like a series women in both the portrait and the photo that was included in the article. The article, however, describes her as someone who laughs. “Miss Towne does not giggle. But she laughs with her whole person. Her face lights up and her big eyes dance with amusement, merriment and sometimes she rocks to and fro. She laughs with perfect freedom. She laughs with girlish glee.” The article was very amusing to read. I also learned that she had already been teaching at the high school since 1895.

An article that appeared in the June 23, 1915, issue of the Omaha Bee talks about how she was assigned the position of Dean of Students in addition to being the head of the English Literature department. With the addition of the new responsibilities, her salary was increased from $1,400 a year to $2,000 a year.

Another great source of information was the Omaha Central High School Archives that contains digitized copies of the school’s newspaper and yearbooks. Jessie was mentioned many times in both. Here are a few of my favorites.

The Central High School Foundation has a short bio of Jessie on their website. Not only did Jessie teach at the school she also graduated from there in 1892. She took courses at Harvard, Stanford and graduated from the University of Nebraska. At some point in time, she was made vice principal. 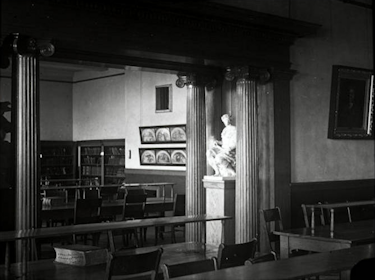 When Jessie attended and taught at the High School it had a much more formal feeling than I would expect to find at a school today. The photos in Nebraska Memories provide us with a glimpse of the ornate sculptures and artwork in the corridors and classrooms.

Even though I’ve already learned a lot about Jessie, I decided to do a couple of more searches. I’m happy I did because I found what I think is the most interesting piece of information. In 1913, Jessie presented at the nineteenth annual meeting of the Nebraska 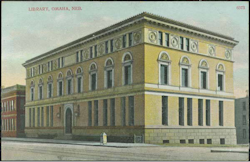 Library Association. The article starts at the bottom of page 394 in Public Libraries, Volume 18. The article outlines the events of the two-day meeting that was held at the Omaha Public Library. Jessie presented a paper on the reading of high school students.

The journal Libraries: A Monthly Review of Library Matters and Methods, Volume 19 provided a few more details about her presentation. Her paper was titled “Stimulation to reading for high-school students.” Her presentation and that of a coworker were “issued in pamphlet form by the Omaha public library.”

As I mentioned before Miss Jessie Towne retired in 1930. She passed away on July 8, 1957. She was survived by her sisters Miss Mary Towne of Omaha and Mrs. Fred Deweese of Lincoln.

While I was researching Jessie, I couldn’t help but find some information about her family. Here are few interesting tidbits of information that I found.

This entry was posted in Information Resources, Nebraska Memories. Bookmark the permalink.