Friday Reads: The Grapes of Wrath, by John Steinbeck 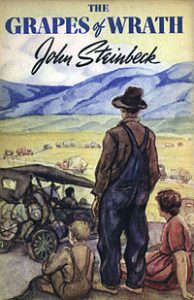 I recently re-read The Grapes of Wrath, and it felt so appropriate for today’s current events. My more experienced eyes were able to read the novel on more levels, as well. You know the story: Dust Bowl farm family sets off to California for the American Dream, but something has happened to the American Dream. There’s a wide cast of characters with realistic strengths and honest flaws, and we get the perspective of all of them over the course of the book—and they’re so frankly written, their desires so plainly stated, that we can easily identify with them—we’ve all been some part of some of these characters, at some points in our lives. This time around, I was much more able to appreciate the unusual structure of the novel—the narrative chapters alternating with the more lyrical, prose-poem chapters. (Try reading any of the lyrical chapters aloud—you’ll be stunned by Steinbeck’s mastery of language when you feel yourself convey the words.) Steinbeck’s use of the form reinforces the timelessness of the tale—the narrative goes on in a familiar linear fashion, but it exists in a shifting, multi-dimensional framework outside of time, which is just as authentic as the narrative it contains, or the narrative that contains it. There is no space between the author and what the author wants to convey to the reader—Steinbeck is not holding back, or affecting disaffection, in an effort to entice you. He does not play it cool for one second in this book. You will never doubt where his head is at. This earnestness could come off as preachy or strident in less capable hands, but I never had that experience with this book. And Steinbeck’s earnestness, about the Joad family and what they are going through, about their moderate dreams, and about why they can’t achieve them, struck me as very relevant to today. The novel is set at the crossroads of economic, political and technologic times that resonate soundly today. Stuff you thought we’d have figured out almost a hundred years later, you know. The idea that farming and food production had become so successful, so advanced, and that people still didn’t have enough to eat—it was shocking then, and it’s shocking today. Today it’s not mechanized farming that we are trying to absorb and normalize, but other scientific advances—like GMOs, and the question of who owns the machines farmers use in their fields, and who gets to decide what to plant, to name just a few. The novel also addresses the dynamic nature of populism, and how it can be used for the power of the people, and how it can be used to divide people and keep them down. The parallels between political leadership and religious leadership are easy to see in the character of the doubting preacher. And we read how religion can be used to bring comfort and encourage love and acceptance—and also how it can be used as a tool to control others, or even to our own disadvantage. You can see why the book won a Pulitzer Prize. (The Pulitzer is celebrating its 100th birthday this year, by the way.) Also by the way: we have this book in our book club kits, so if you’re in Nebraska, your library can check this book out for your book club. You’ll have some good discussions, I promise. Definitely last, but definitely not least in your discussions—what is up with that ending? There are a lot of ways to interpret it. It would be interesting to hear what different people in the group think about it. I’ll sign off with an audio clip from YouTube of Woody Guthrie singing “Tom Joad,” because why not. (There are a few other musicians with songs about Tom Joad—the character seems to have really struck a chord with pop culture. It’s a fun search to try and find all the songs.)