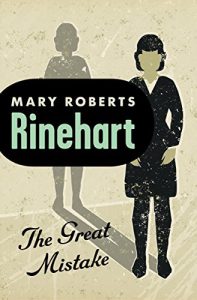 In the mystery series “Death on Demand”, by Carolyn Hart, several women authors of the golden age are mentioned: Agatha Christy, Ngaio Marsh, Dorothy Sayers, Margery Allingham, and our own Mignon Eberhart. But one author I’d never heard of was Mary Roberts Rinehart. So when an e-book edition of The Great Mistake, one of her titles, popped up on BookBub,  I bought it.

And I wasn’t disappointed. Set in a small town called Beverly set near Town, it is large enough to have a hunt club, and Society. After some digging online, I discovered the book was published in 1940, but nothing of World War II, politics, or international tensions shadow this book. I was a third of the way through before I could clearly say, “well, we don’t do that anymore”.  The characters are from all sections of society, and for the most part are treated very fairly. If anyone comes off looking churlish, it’s the homicide officer from Town, and of course, it’s part of his job, as the outsider. The main characters are all definitely rounded. There is a love story, but surprisingly enough for the time, it is low-key.  The foundation of the mystery is built skillfully, adding to the suspense.

The main character, Pat, comes into “the big house on the Hill,” to be a secretary to the widow of the billionaire who built the house for her and her son.  Maude, the widow, is a vibrant, attractive personality, and busy hostess in need of help for her parties and social responsibilities. And Pat is fond of her.  Tony is the son,  who runs the family firm in Town  and at first they merely get on each others nerves.  Pat never sets out to be a detective of any type, unlike many other main characters of mystery fiction, particularly cozy mysteries. She is meant to be more of a way for us to be a part of the mystery. The events of the story tell on her, as her employer falls mysteriously ill. Then a dear friend’s runaway & divorced husbanded returns for nursing for a terminal illness, (he says.)  A mysterious figure is seen peering in a window, and a night watchman is mugged, stripped of trousers (& keys).  The entire mystery is framed by remarks about writing the entire story down for everyone, which serves as a fine way to find out how the dangling threads are tied up. It all flows so well, the language enhances the story and never shouts out the time period. A smoother read in that regard than Christie.

Mary Roberts Rinehart, (August 12, 1876-September 22, 1958) was often called the American Agatha Christie. While she is considered the source of the phrase “the butler did it”, from her novel The Door, 1930, the writer never used that phrase in the book. She is also considered to have invented the “Had-I-But-Known” school of mystery writing in her book The Circular Staircase, 1908. She wrote novels, plays, short stories, travelogues, and was a war correspondent. With her sons she founded the publishing house Farrer & Rinehart, and served as director.