“The trains came together just beyond the yard limits, on a big curve, where there was a heavy fill, and the impact was so great that the engine 1225, pulling the extra from the west, was thrown from the track, as it struck 1182, 63’s engine, and was overturned and 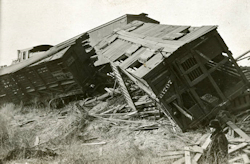 fell almost bottom side up, killing the two men as she went over. Train 63 was standing still, and the force of the collision was so great that five cars, the tender and engine were badly wrecked, and three cars and the engine on the stock extra were reduced to kindling wood. The wrecking train was ordered from McCook and reached here about 1:30, and the work of cleaning the track was commenced in earnest, and was finally finished at 5:40 p. m., so that trains could go over the track.”

There are six photos of this deadly wreck in Nebraska Memories taken by L. E. Tait. Basic information is written on the edges of each photo but the newspaper article provides more details. 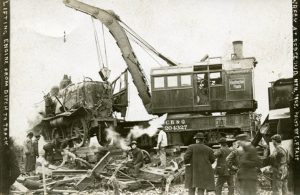 After reading the article, I think I was able to match the photos with the information provided in the newspaper article.

The photo labeled #1 shows the wrecking train, that came from McCook, lifting engine 1225. Engine 1225 was part of the stock train. 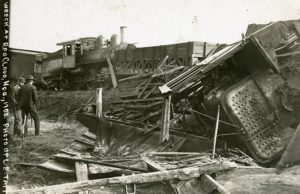 The photo labeled #2 shows two engines. I’m assuming the one at the top left of the photo is engine 1182. It was part of train No. 63. Along the right side of the photo is engine 1225. I know it’s somewhat hard to tell that this is an engine just by looking at this photo. If you compare the front end of the engine in photo #1 you can see that it matches the pile of metal on the ground.

Photo #4 shows two men sitting on a pile of wreckage. Laying between them is a large axe. The man on the left is sitting on engine 1225, which is upside down. 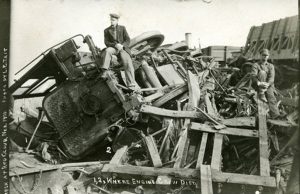 The paper said it “overturned and fell almost bottom side up, killing the two men as she went over.” The caption of the photo reads “1,2, Where Engine Crew Died”. If you look at the ground to the left and right of the engine, you will see the numbers 1 and 2 written on the picture. Killed in the accident were Engineer John W. Bartholoma and Fireman George Snoke. Short obituaries for both men can be found at the end of the newspaper article.

According to the newspaper article “The excitement was intense and more than 3,000 people visited the wreck, coming from Kansas and Nebraska towns for a radius of 20 miles, and most of them remained all day.” When I reading that line my first thought was that the newspaper article had to be exaggerating, that’s a lot of people. Looking closely at photo #6, I think the newspaper could be correct. Look at the huge groups of people on both sides of the track.

If you to read the complete newspaper article, you may have noticed that there was no reference to the dollar amount of damage caused by this wreck. While I was looking over the newspaper page that contained the article about the train wreck, I noticed the “Railroad News Items” along the left side of the page. Two items in this column relate to the wreck at Red Cloud.

Below the railroad news, you will find “Card of Thanks” from the Bartholoma and Snoke families.