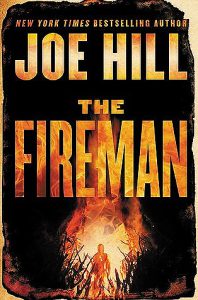 A fast-moving plague has set the world ablaze, quite literally. The “Dragonscale” spore marks its hosts with intricate tattoo-like patterns, which just happen to also cause them to spontaneously combust. Whole cities watch in terrors as their inhabitants burn to death, no cure in sight. To protect themselves, some citizens band together into “cremation squads” and hunt down those carrying the disease. Before the local hospital ignited, Nurse Harper cared for the infected in her New Hampshire town. She and her husband Jakob made a pact to kill themselves if they ever caught the spore. Now Harper’s on the run from the cremation squads and Jakob, having discovered her own dragonscale markings… and her pregnancy. This is the second book by Joe Hill I’ve read, the first being NOS4A2 (which I loved). It lived up to my expectations, and I will seek out more of his work. It wasn’t until I finished this book that I realized that Joe is the son of Stephen King, writing under a pseudonym so that his writing could stand on its own merit (which it does). If you’re in the mood for a fast-paced horror/thriller novel, this is it!
This entry was posted in Books & Reading and tagged Friday Reads. Bookmark the permalink.