Meet Sam Shaw who serves as our Planning and Data Services Coordinator. 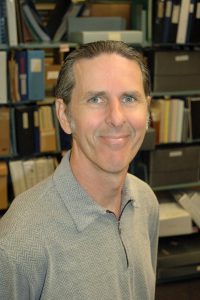 Sam collects and gathers statistical data about public libraries and produces a variety of products. A large portion of the data collected is from the annual IMLS Public Library Survey. Sam was born and raised in Northeast Lincoln and is a graduate of Nebraska Wesleyan University where he received a BA in Philosophy. Since philosophical jobs were in short supply, Sam worked at a law firm in Lincoln and discovered that he would rather devote his time to public service as opposed to private practice. Sam then became the public services librarian at the Nebraska State Library, better known as the Nebraska Supreme Court Law Library in the capitol building. After staff elimination from budget cuts (Sam got RIF’d), he became the librarian at the Nebraska State Penitentiary and later the Library Coordinator for the Nebraska Correctional Libraries. He obtained his MLS from the University of Missouri. Sam says the most satisfying thing about working in libraries is finding information, helping people with projects, and serving the public When I asked Sam what he thinks of when I mention the Library Commission he responded: Its laid back, there is support for new ideas and ways of doing things, and a great group of people. When Sam isn’t working at the Commission, he enjoys light workouts, chen style tai chi, gardening, fixing things, visiting botanical gardens, and ballroom dancing. He is the father to a daughter (age 9) and a son (age 5). If he could choose any other profession he would like to found and run non-profits supporting the local community. Likely these would be bringing a large scale botanical Garden or an Asian Cultural Center (tai chi and Asian botanical garden or self-realization center) to Lincoln. Sam describes himself as non-fiction reader and a lowbrow fiction reader, with his favorite authors including John Waters, Raymond Carver, Charles Bukowski, Albert Camus, and Larry Brown. It’s not uncommon for Sam to have 40 or more items borrowed from the Lincoln City Library at one time, including kids’ books and DVDs. A perfect day might include a favorable climate, sleeping late, drinks, napping, dinner, and late night salsa dancing. It’s wonderful to have Sam at the Library Commission after he has served other Nebraska State Agencies so well. .