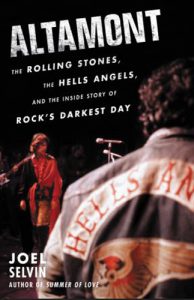 It would be a gross understatement to say that Joel Selvin’s Altamont provides a mere description of the events leading up to and during the Altamont music festival (December 6, 1969). The San Francisco music critic provides much deeper coverage, including the overall music culture at the time, the Woodstock festival, the Rolling Stones, the Grateful Dead, and the lives of musicians and managers that were involved in these and other music events in the late 1960’s. And the other major player at Altamont, the Hells Angels.

The organizers of the Altamont festival, which was plugged as “Woodstock West”, unfortunately learned very few of the lessons that came from Woodstock. Altamont was largely a project put together by the Rolling Stones and other assorted handlers that included the Grateful Dead, and was in the end a semi-functional disaster. The Rolling Stones hadn’t toured since 1966, partly due to travel restrictions because of drug charges, and were in a financial crisis so to speak. So in November of 1969 the Stones began touring the U.S., playing large sold-out arenas with ticket prices outside of the norm (and also subsequently skipping from town to town without paying their hotel and travel bills). Altamont was supposed to be the answer to media and fan criticism of the Stones’ high ticket prices, but there were a few other factors at play in their decision to engage in a large scale concert. For one, the Stones weren’t at Woodstock, so there was perhaps an effort for something similar to make their mark (think grand scale). Secondly, the concert, although free to those attending, was always about the money. Perhaps not for a band like the Grateful Dead, but definitely for the Stones. For instance, Selvin describes one of the contributors to the chaos of the event being the multiple changes of venue. At one point, the Sears Point Raceway (now Sonoma Raceway) was selected and theoretically would have been a much better choice for the event than Altamont (after the organizers failed to obtain a permit to hold the event at Golden Gate Park). However, the Sears Point owners requested cash up front and film distribution rights, and the Stones weren’t willing to give that up. In the long run, it would have been well worth it.

In addition to the Stones, the lineup for the Altamont concert included Santana, Jefferson Airplane, The Flying Burrito Brothers, Crosby, Stills, Nash & Young, and the Grateful Dead (although due to increased violence throughout the day of the event, the Dead decided not to play). With the last minute change in venue, one of the problems with the event was the fact that the stage could not be properly erected (and therefore lacked a natural barrier between the musicians and the mixture of LSD, amphetamines, and cheap wine that laced the crowd). The stage stood less than four feet high (compared with 15 feet at Woodstock). Added to the logistical difficulties were huge amount of traffic, inadequate roads, and the lack of other essentials such as food, water, and facilities (yes, those kinds of facilities). Finally (and perhaps most importantly), due to a distrust of the cops, at the suggestion of Jefferson Airplane, the Stones hired no security for the event other than paying the Hells Angels $500 worth of beer (on a truck with ice) in exchange for the Angels agreement to hang out in front and keep the spectators off the stage. And as we all know, the Hells Angels ain’t no cops (especially when they are spending the entire day and night drinking free ice cold beer). The scene at Altamont reeked of trouble from the start, as Selvin offers this depiction of Santana (the first band of the day) beginning to play:

“Santana drummer Michael Shrieve sensed the fog of evil as soon as he settled behind his kit and looked around. The stage felt claustrophobic and the audience packed up against it as tightly as they could. He saw one particularly menacing Hells Angel called Animal, who was wearing a coyote skin as a headdress—the flattened, dried-out head of the long-dead animal hanging grotesquely over his forehead. Something felt wrong from the start. … The Angels waded into the crowd flailing pool cues another half dozen times during the band’s forth-five-minute set, chasing down a hippie photographer who refused to give up his film, smacking around some freaked-out kid trying to escape by climbing onto the stage.”

All said and done, the casualties at Altamont included four deaths, numerous beatings at the hands of the Angels, and general bad vibes. Selvin paints an intriguing and engaging portrait of the events leading up to and during Altamont, as well as the major players. If you have any interest in the historical events of the late 1960’s, the Rolling Stones, or the rock musicians from San Francisco scene during that time, this is an easy and interesting read.