Like Leonard Nimoy and Thin Lizzy, Nathaniel Hawthorne is somewhat unfairly judged on the basis of his one big hit.  I’d wager that lots of you were forced to read The Scarlet Letter at some point in your school days and, like me, did not find it magnificent.  Letter is a great book to teach, as it makes literary mechanics very noticeable.  But it’s not particularly fun to read, especially when you’re a teen.  The prose is dense, words piled high as Hawthorne describes hats and tunics in obsessive detail, and there’s plenty of moralizing.   The book’s merits are buried behind the walls of text. 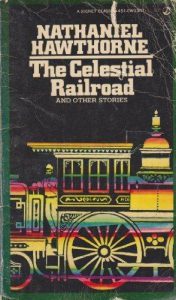 Thankfully, Hawthorne covered a lot of the same themes in his short stories.  The excesses that sometimes hampered his novels are excised and what’s left is relatively trim and reader-friendly.  There are many echoes of Letter here.  Sin and conscience are examined in “Roger Malvin’s Burial”.  “The Maypole of Merry Mount” analyzes Puritan society and its distaste for good times.  There’s a much better symbol than an A in “The Minister’s Black Veil”.  And, though the stories fluctuate in quality, the writing throughout is less laborious than anything in his novels.   Hawthorne was a guy writing stories in the 1800s and the stories were mostly about the 1600s and 1700s, so it’s unfair to expect him to read like Janet Evanovich.  But the prose here has some life and sometimes he even dips into very black humor:

“[T]here sat the light-heeled reprobate in the stocks; or if he danced, it was round the whipping post, which might be termed the Puritan Maypole.”

Yikes!  My favorite aspect of these stories is the treatment of the Puritans.  Hawthorne was viewing America’s past from the rapidly-changing nineteenth century.  Transcendentalists like Emerson and Thoreau were popularizing sensitive, romantic spirituality—pretty much the polar opposite of hard, cold Puritanism.  And yet Hawthorne never really depicts Puritans as simply primitives or America’s embarrassing, witch-hating grandparents.   He portrays the past in an even-handed way, not as a bunch of villains and their victims: the “immitigable zealots” of “Merry Mount” are also the anti-despots of “The Gray Champion”.   Both good and bad get their time in the spotlight.  Scarlet Letter and House of Seven Gables covered much of the same ground, but it’s conveyed more effectively in these short stories.

If you have sad memories of Hawthorne, I’d recommend giving a collection like this a try.  It sometimes pays to give the classics a second look.