Friday Reads: Midnight in the Garden of Good and Evil 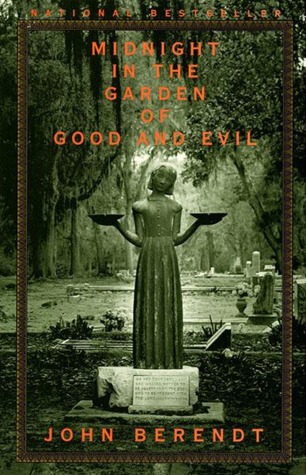 What do the following have in common? All of these characters and situations – and more – appear in the novelized, non-fiction book Midnight in the Garden of Good and Evil by John Berendt. The author, a magazine writer in New York City for decades, discovered the magic of airline supersaver fares in the early 1980s which offered travel to U.S. cities for less than the nouvelle cuisine restaurant meals he critiqued. Through cheap travel to a sampling of continental U.S. cities, the author finds himself drawn more and more to Savannah, Georgia with its charms and eccentricities, so much so that he finally ends up living more of the year there than in NYC. This title happens to be the one our Nebraska Library Commission book club will be discussing at its August session (and we have a book club kit in case your local group would like to read it). From shocking, to laugh-out-loud funny, the book manages to draw in the reader into the lives of the characters. Ultimately, Savannah itself becomes a character. Its history is fascinating. One example is that fact that, through southern charm and good manners, the then-mayor managed to talk the union general Sherman out of burning the city to ground in his march across the south. The city itself, however, is not all charm and hospitality, with its beautiful squares that form the basis of the “old” Savannah. The city has traditionally stiff-armed any attempts to bring in local economic development and any chain stores. Such entities moved on up or down the road to Augusta or Atlanta. But the lack of economic opportunity, the still-present stratification of society along black and white lines certainly contributed to Savannah being named “Murder Capital of the U.S.” at one point. Give it a try. I think you will be charmed, shocked and tickled with Mr. Berendt’s loving yet dispassionate treatment of Savannah. It certainly has led me to put the city on my list of must-see places sometime in my life.
This entry was posted in Books & Reading and tagged Friday Reads. Bookmark the permalink.

1 Response to Friday Reads: Midnight in the Garden of Good and Evil