Sometimes it is more than just a Nebraska Memories Blog Post

This week I had planned to write a short blog post highlighting some of the photos in Nebraska Memories taken 100 years ago in 1916. While I hadn’t actually typed a single character, mentally I had a great start on the post. That was until I did a quick web search on Spirella. That search started a chain of events that led to a bit of work and me deciding to revise the post I’d been mentally composing.

Here is the picture from 1916 that started my search. As you can see this image shows a room full of women sewing what looks like wide strips of fabric. 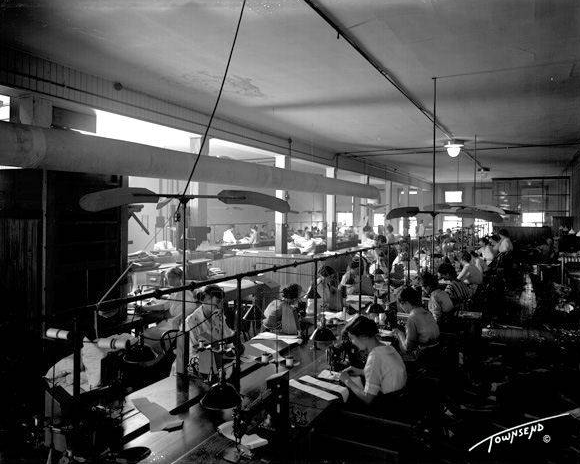 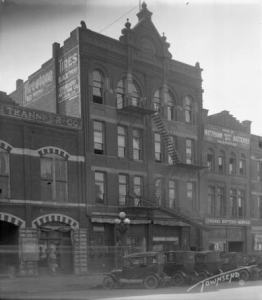 The Spirella Company was located at 211-215 S. 11th Street, Lincoln, Nebraska. The Library Commission’s office is located between 12th and 13th streets so this building would have been located about a block west. Unfortunately, the building was torn down but we do have a picture of the outside of the building taken in 1918.

Don’t worry if you don’t recognize the name Spirella. Before starting this blog post, all I knew was that the Spirella Company made corsets and that in 1918 Ira B. Saunders was the General Manager of the plant.

A quick web search led me to the article in Wikipedia about Spirella. It provided me with a lot more information about Spirella and the twisted and flattened coils of wire used in the corsets. The Wikipedia article however was missing what I considered to be an important piece of information. There was no reference of the factory in Lincoln. How could that be, I was just looking at a picture of the factory. 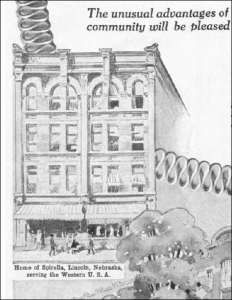 This is where the extra bit of work started. I knew I had to add the Lincoln location to the article but before I did, I wanted to do a bit of research to see if I could find any more information. The first thing I found that clearly confirmed that Spirella had a location in Lincoln was a one-page ad in the March 1917 issue of The Ladies’ Home Journal. The ad contained an image of the plant and stated, “At Lincoln, Nebraska, a plant was located to care for our clients west of the Mississippi.” The full ad is available online but I have included the image of the Lincoln building that was used in the ad. Did you notice that the top decorative triangle is missing? The curvy line to the top and left of the building is an image of the springs used in the corsets.

In the 1917 issue of The American Federationist another ad mentions the Lincoln location. In the add it states “Spirella Corsets Are Made in Spirella’s Daylight Factories under Safe, Sanitary, Convenient, Working Conditions by well paid, contented, skilled works who find joy in their work.”

While I had more than enough information to update the Wikipedia article I was still curious, so I did a quick search across the historic collection of newspapers available on the Library of Congresses’ Chronicling America: Historic American Newspapers website. While I didn’t find any information about the factory itself, I did learn a bit more about the corsets and the local corsetiere. 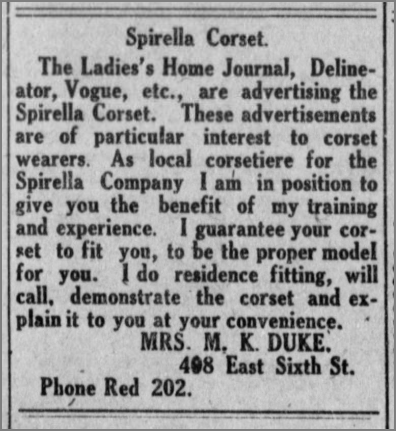 In August of 1911, Magnolia traveled to Pennsylvania to attend the National Training School of Spirella Corsetieres. You can read about her trip in the article titled Home from Training School that appeared in the Sept. 1 edition of The North Platte semi-weekly tribune. (The article is at the top of the page, just to the right of the owls.) 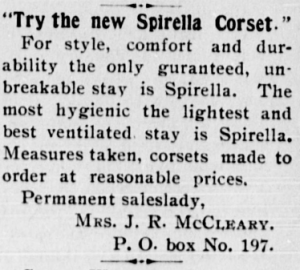 Another corsetiere in the state was Mrs. J. R. McCleary of Falls City. Here is her ad for corsets that appeared in the June 28, 1907 issue of The Falls City Tribune.