In 2010 Justin Cronin published The Passage, the first book in The Passage Trilogy. Set roughly 100 years after the accidental release of thirteen vampire-like test subjects (virals), The Passage focuses on one of the few remaining human settlements. After their release from a government facility, the virals killed or infected the majority of Americans, leaving few behind. With their food supply and power resources dwindling, a small band sets out in search of other survivors. They also seek the story of a mysterious young girl, Amy, who is not what she seems. Led by a young man named Peter, they find some answers.

The subsequent novels, The Twelve (2012) and The City of Mirrors (2016), follow Peter’s three decade journey to defeat the virals, as well as discover the truth about Amy. During this period, it appears as though the virals have been destroyed. Their disappearance results in the population spreading beyond their walled settlements. However, not all is as it seems. Unbeknownst to Peter and his allies, the virals are massing for a series of attacks. The City of Mirrors focuses on these battles, as well as a herculean attempt to save the remaining survivors. 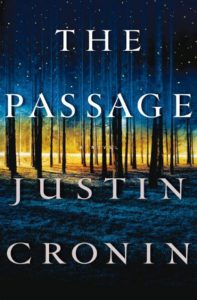 While The Passage Trilogy serves as a classic example of post-apocalyptic fiction, Cronin draws from works such as the Bible and Bram Stoker’s Dracula to create a nuanced and multi-layered story. His characters are more than words on a page, but living, breathing human beings. It would have been easy for Cronin to rely on stereotypes such as the damsel in distress, the classic loner or the all-conquering hero. These are not perfect people, but deeply flawed and damaged individuals, who, for whatever reason, refuse to give up hope. Rather, Cronin explores their faults – how these weaknesses enable them to survive and even grow. Despite their faults, or perhaps because of them, characters such as Peter are likeable. Ultimately, this story centers on relationships and what ties us together as a society, as a race.

Cronin is an excellent writer, with a fluid and relatable style of writing. Unlike similar trilogies, the story does not get bogged down in the details. Additionally, there are no slow parts, where the story stops moving. Even when there is little action, Cronin continues to move the story forward. Each time I read his books, I feel like I am reading them for the first time. Often, they give me the chills and I have to stop reading. If you are a fan of vampires and post-apocalyptic fiction, then I highly recommend this series.