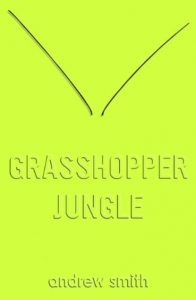 I first listened to Andrew Smith’s Grasshopper Jungle in fall 2015, and it instantly became my new favorite book! Since then I’ve read other Smith books (Winger, Stand-Off, 100 Sideways Miles, The Marbury Lens), and while I liked them all I’d have to say that Grasshopper Jungle stands out as something completely unique. As a piece of writing, it is distinctive – not just from Smith’s other books but from most other books I’ve read! In part, this might be because Smith wrote it at a point in time when he had decided to get out of the business of writing for publication. “I never felt so free as when I wrote things that I believed nobody would ever see. Grasshopper Jungle was one of those things,” he confesses in the acknowledgements section of the book, which someone else evidently did read since they convinced him to publish it. (Publication was obviously a good idea: Grasshopper Jungle was a 2015 Michael L. Printz Honor Book.) What the book is ostensibly about, versus what I love about it, are two different things. On the surface, this book is about an apocalyptic plague of six-foot-tall, man-eating praying mantises, accidentally unleashed in the fictional, economically-depressed town of Ealing, Iowa. What I love most are the main characters, sixteen-year-old Austin Szerba, who narrates, and his best friend, Robby Brees. They are, among other things, smart, sincere, loyal, witty, matter-of-fact, unflinching, hilarious, and respectfully profane. One thing I particularly love about Austin is his obsession with history and truth, which are recurring themes throughout the book. Austin begins his narration with the following rumination on history:

I read somewhere that human beings are genetically predisposed to record history. We believe it will prevent us from doing stupid things in the future. But even though we dutifully archived elaborate records of everything we’ve ever done, we also manage to keep on doing dumber and dumber shit. This is my history.

Austin has been recording his own history for years, as evidenced by the thigh-high stack of journals in his closet; and his book narration is a continuation of this process. Included in Austin’s stream-of-consciousness recitations are his thoughts on the nature of history, the act of recording it, and the impossibility of getting it all down. These thoughts, at least in my opinion, inform, and are reinforced by, the stylistic quirks that permeate Smith’s writing in this particular book. These quirks include repetition of words and phrases to the point where they become epigrammatic refrains; use of an almost clinical, detached language to describe horrifying and distressing events; and Austin’s practice of reporting not just the main event, but also a multitude of other events that are occurring simultaneously, to other people, in other parts of the world. While this last quirk would be considered digression in another book, in Grasshopper Jungle it is a manifestation of Austin’s beliefs about how to report history in order to approach the truth. Austin’s girlfriend Shann describes his process thusly: “I love how you tell stories. I love how, whenever you tell me a story, you go backwards and forwards and tell me everything else that could possibly be happening in every direction . . . .” Elsewhere, addressing the futility of this endeavor, Austin states: “You could never get everything in a book. Good books are about everything;” and “Even when I tried to tell everything that happened, I knew my accounts were ultimately nothing more than an abbreviation.” Austin is as devoted to telling the truth as he is to accurately recording history. To others, he never lies, especially if asked a direct question. The most he sometimes does is not volunteer the whole truth. (About a partial truth he told his parents, he says: “It wasn’t a lie; it was an abbreviation.”) From himself, he hides nothing, even if the truth is embarrassing or confusing. It’s why he doesn’t shy away from the realization that he is in love with, and sexually attracted to, both his best friend Robby, who is gay, and his girlfriend, Shann. He might not know what to do about these feelings, he might not know what they mean, but he never tries to lie to himself about them. I also love the fact that Austin and Robby have favorite poems, which they recite out loud to each other. According to Austin:

Robby’s favorite poem is Dulce Et Decorum Est by Wilfred Owen. It is a poem about war and lies, youth and thievery. . . .

My favorite poem is The Emperor of Ice-Cream by Wallace Stevens. It is a poem about everything else: sex, lust, pleasure, loneliness, and death. . . .

Because favorite poems often reveal something about character, and because I suspected they might reinforce the underlying themes of the book, I sought them out to read in their entirety. Although very different on the surface, both call on readers to reject artifice and sentimentality in favor of seeing things exactly as they are – at least to the extent humanly possible. In “Dulce Et Decorum Est” a gruesome description of a World War I soldier choking to death on poisonous gas is presented in stark contrast to the slogan (“That old Lie”) used to encourage young men to enlist at the start of the war: “Dulce et decorum est / Pro patria mori.” (The Latin phrase, borrowed from Horace, can be translated as “it is sweet and right to die for your country.”) And in “The Emperor of Ice-Cream” we are told to “Let be be finale of seem.” This philosophy definitely informs Austin’s approach to recording history, as evidenced by the matter-of-fact tone and blunt language he favors in his narration, along with his commitment to objectivity: “I do not know why, but that is not my job. My job is saying what.” If you like quirky, irreverent books with absurd plots, which also have depths you can plumb, Grasshopper Jungle might be for you. As Andrew Smith said in a February 18, 2014 interview with Walter Heymann, “. . . Grasshopper Jungle is very realistic, but at the same time, it’s absolutely ridiculous. It’s the same way our world is.” Smith, Andrew. Grasshopper Jungle. New York: Dutton, 2014.
This entry was posted in Books & Reading and tagged Friday Reads. Bookmark the permalink.