Friday Reads: Up to This Pointe by Jennifer Longo 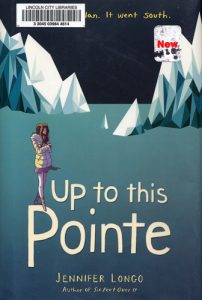 Harper (17) and her best friend Kate have held to the plan for their futures since sixth grade: to become ballerinas and share an apartment in their home city of San Francisco. Then things fall apart. Kate is on her way to their dream, Harper is not. Her body cannot do what Kate can do. With her dream lost, Harper goes to Antarctica to “winter over” for six months as a research assistant (and to patch herself back together). Told in alternating chapters of “Antarctica” and “San Francisco” the book slowly reveals what Harper should have seen coming but chose to ignore. Booklist says, “An adventure story with lots of heart.”

I found this book interesting because Harper knew little about Antarctica or the science studies connected with wintering over, but she lucked into a lesser assistant position. The reader learns about Antarctica and what Harper’s strong points are as Harper learns them (though a couple of times I did want to whack her upside the head). Still, people have to learn in their own time and way – and that does happen for Harper. I liked that Harper was good at her job, organizing the scientist’s notes and data. Ultimately she is generous to an unlikable member of the winter over team.

An unusual setting for a teen novel, it features two people who were dedicated to their futures and approached them with unfailing intensity and effort.  To lose that would be devastating, and it does take Harper quite a while to move ahead.

This entry was posted in Books & Reading, Youth Services and tagged Friday Reads. Bookmark the permalink.

One Response to Friday Reads: Up to This Pointe by Jennifer Longo