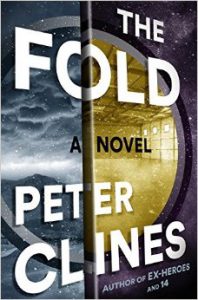 They tried to create a teleportation machine (a transporter, if you’re familiar with Star Trek), but after much study, came to the realization the present technology can’t support the theory. So they moved the project and attempted a different approach.   This team of  DARPA (Defense Advanced Research Projects Agency) scientists in the California desert who believe they have created a portal that “folds” dimensions so a traveler may move hundreds of miles with one step. At budget time the agencies involved aren’t getting the information they believe they should. And even the head of their project in Washington is getting some odd vibes from the group, so he sends his own form of investigative team in to check on everything. A high school English teacher, Leland “Mike” Erikson, who looks like Servius Snape, college edition.

Mike, as he prefers to be known, had an eidetic memory, and an extremely high IQ. The combination makes him a perfect fit for the  Sherlock Holmes role. Mike is interesting, and the way he handles his memory makes the concept approachable. It also adds an interesting dimension to some of the things we take for granted, like forgetting painful experiences, and the immediacy of grief.

And yet, even for Mike, it’s hard to see what’s wrong with the Albuquerque Door, as they’ve named this machine that fold space. There have been nearly 400 human tests, without an injury. “Nine people, two hundred and sixteen rats, six cats, and a chimpanzee,” (p.49) have been through the door, and not one lost. And yet all the scientists, engineers, and programmers, who have been the test subjects are uneasy, and want to continue to do tests. Until something does go wrong. Of course, it goes so badly wrong that everyone is stunned, and someone dies.  This group is small, again, just six people, who outsource for medical or any other services.

Oh, yes the secret comes out, and the situation goes downhill fast. This becomes on of those Nantucket sleigh rides, and with very interesting twists. Just as you think you understand what’s going on, Mr. Clines throws you a curve, some from left field. And in the end, some logic, luck, and fast thinking saves the day. Just not neatly, cleanly, and with some odds and ends.

It is definitely an adult work of Science Fiction, Fantasy/Horror, some parts are not for the squeamish, and it is thriller territory. But it is a fun, and satisfying read, with quips, humor, and interesting characters.