Friday Reads: How Music Got Free: The End of an Industry, the Turn of the Century, and the Patient Zero of Piracy, by Stephen Witt 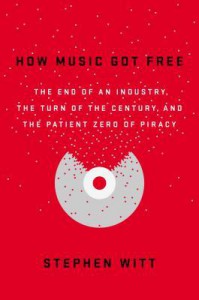 How do you listen to music nowadays?  Do you still buy CDs? (…did you ever buy CDs? I might be showing my age here…), download digital files, use a streaming service online?  Did you ever wonder how exactly we got from the “good old days” of recording mixed tapes to having any song available at our fingertips?  How Music Got Free: The End of an Industry, the Turn of the Century, and the Patient Zero of Piracy by Stephen Witt answers this question and more.  From the invention of the MP3 format to the role of the music industury executives in the demise of their own business, this is a fascinating history of an industry turned on its head.  Witt focuses on 3 individuals who couldn’t be more different, yet who each played a crucial role in changing how we access music.
In Germany, an audio engineer, Karlheinz Brandenburg, and his team developed the MPEG3 data compression format and fought for its acceptance over rival formats, a largely political battle.  When not adopted by the industry, the team released the MP3 format to the public as a free conversion tool and music player.
In North Carolina, Dell Glover was using his job at a CD manufacturing plant to become the leading music leaker in an elite online community.  What had been a tedious task of burning individual cds to sell from the trunk of his car on weekends became vastly simplified with the introduction of the MP3 format and the ability to upload music easily and quickly to the internet.  (Mr. Witt also published this piece about Dell Glover in the New Yorker in April 2015.)
In New York, Doug Morris, the CEO of Universal Music Group, was too concerned with signing the next big rap artist to pay much mind to the growing portable music revolution.  Morris and other executives failed to grasp the significance of the MP3 format (and the piracy it enabled), leading eventually to a litigative nightmare and the downfall of the music industry as we knew it.
Whether or not you were online in the heyday of Napster, this book tells a compelling tale about a fascinating part of our recent history.
Other reviews: New York Times, The Guardian, Washington Post.
This entry was posted in Books & Reading and tagged Friday Reads. Bookmark the permalink.

1 Response to Friday Reads: How Music Got Free: The End of an Industry, the Turn of the Century, and the Patient Zero of Piracy, by Stephen Witt