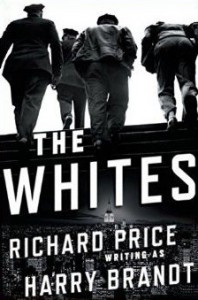 “When I was in prison, I was wrapped up in all those deep books. That Tolstoy crap – people shouldn’t read that stuff.” –Mike Tyson

The Whites, by Richard Price writing as Harry Brandt (more on that later) tells the familiar story of police detectives chasing criminals. The story mostly follows main character detective Billy Graves (still on the force but relegated to the night shift after some mishaps) and his cop friends (who have all left the force). Each of them has their own “white”, which is a reference to the white whale or Moby Dick. In this case the white is the one person that they believe got away with a brutal crime, but whose guilt cannot concretely be proved. Thus, their white roams free, escaping any societal punishment. Instead of tracking them down, injecting them with M99, encasing them in plastic, giving them their just desserts in a way not suitable for the squeamish (think power tools) and then dumping them into the ocean ala Dexter Morgan, the detectives just remain haunted by the open cases and continue to work the system to try and develop a new lead or evidence to connect the dots. Ho-hum. At least until the whites start turning up dead; certainly not in Dexter Morgan fashion, but dead nonetheless. And Price navigates the moral waters of such a course in a more typical way, at least compared to the morality of Dexter Morgan. The thing about Price is that there is nothing new in the story or the formula (including a thrilling side story), but where Price excels is in the way he describes the ordinary dialogue and events of these somewhat (at least for cops) ordinary people. It’s what made his previous novels and his writing on The Wire so raw, real, engaging, and so darkly humorous. Finally, why do we have “Richard Price writing as Harry Brandt”? Here’s Price’s explanation:

“I wrote it under a pseudonym because I intended to write a straight-up urban thriller — which I’ve never done before — and I wanted to have a separate persona for it. However, the book kept expanding and became like any other book I’ve written, so looking back, I wish I hadn’t used a pen name.”

Long story short: Nothing new here, but if you liked his other stuff you’ll like this one. Price also mentioned other writers who adopted pen names and who seemed to morph into those roles with distinction. Although this apparently was his idea from the start (to morph into a literary alter ego), he mentioned that he never really felt that way. Call him what you want (Harry, Richard, Guy, or Fella), but if you go into it knowing that The Whites isn’t any of that “Tolstoy crap” (and not expecting it), you might enjoy it just a little bit.
This entry was posted in Books & Reading, General and tagged Friday Reads. Bookmark the permalink.