Friday Reads : The Meaning of Names 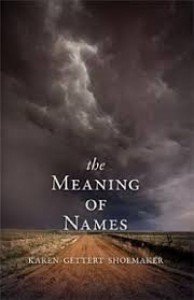 Last year the nation recognized the centennial of the First World War. The sacrifices of men and women on the home front, as well as the violence and hatred that swept across America during World War I (WWI) are addressed in The Meaning of Names. From Amazon: “Stuart, Nebraska is a long way from the battlefields of Western Europe, but it is not immune to the horrors of the first Great War for Peace. Like all communities, it has lost sons and daughters to the fighting, with many more giving themselves over to the hatred only war can engender. Set in 1918 in the farm country at the heart of America, The Meaning of Names is the story of an ordinary woman trying to raise a family during extraordinary times. Estranged from her parents because she married against their will, confronted with violence and prejudice against her people, and caught up in the midst of the worst plague the world has ever seen, Gerda Vogel, an American of German descent, must find the strength to keep her family safe from the effects of a war that threatens to consume the whole world.” The Meaning Names is the 2014/15 Omaha Reads selection.  While I am only half-way through it, I completely agree that this is a must-read about what life was like in the Midwest during World War I and the Spanish Flu Pandemic of 1918-1919. Nebraska author Karen Gettert Shoemaker is a faculty mentor with the University of Nebraska’s MFA in Writing Program. She lives in Lincoln, Nebraska, where she and her husband own and operate Shoemaker’s Truck Stop and Travel Center.
This entry was posted in Books & Reading and tagged Friday Reads. Bookmark the permalink.

1 Response to Friday Reads : The Meaning of Names