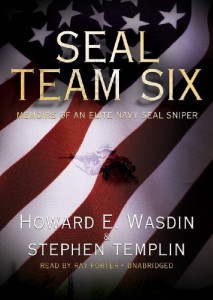 I’ve recently been reading some of Suzanne Brockmann’s romantic suspense novels, which feature Navy SEALS as leading men. This got me wondering about real Navy SEALS—can they truly be as accomplished and multi-talented as Brockmann makes them out to be? My curiosity piqued, I searched Lincoln City Libraries’ OverDrive collection and wound up checking out the audiobook edition of SEAL Team Six: Memoirs of an Elite Navy SEAL Sniper, by Howard Wasdin.

I’m about half-way through at this point, and so far have found it quite interesting. Wasdin begins by recounting his difficult childhood, which he later credits with preparing him to withstand many of the rigors of the SEAL training and selection process. His descriptions of the physical and mental challenges SEAL candidates endure definitely inspire awe and respect. At the same time, it’s easy to see what a toll this career would take on family life. At the point I’m at in the story Wasdin is still married, with two kids, but his allusions to relationship strain make me think the marriage won’t survive.

So far I’d say that Wasdin’s non-fiction account of the numerous and incredibly varied skills and abilities of Navy SEALS is every bit as impressive as Brockmann’s fictional version—meaning maybe she’s not exaggerating. Unfortunately, I’m not sure the path to a happy ending is going to be quite as straight-forward and assured.

Wasdin’s memoir definitely offers a window into a life very different from my own. It’s impossible not to admire and respect the strength, tenacity, and intelligence required to make it as a SEAL, and I’m definitely looking forward to listening to the rest of his story.