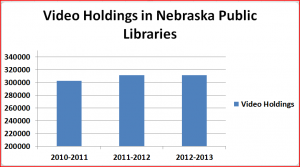 For this week, the Data Dude takes a look at some innovative library services being offered and focuses on the planning aspects of potentially giving them a try in your library. In particular, this is in response to the Montgomery (Alabama) City-County Public Library cutting back on library hours at physical locations (I’m sure there are many Nebraska examples as well). All is not doom and gloom, though, as the Alabama library appears to be expanding its digital and online services to meet the needs of the community. Now, the data collected for video holdings in Nebraska libraries is, I’ll admit, pretty much of a bore (see the graph), and may not support the conclusion that a shift has occurred. But, the Dude thinks a potential shift may be eminent, and that is the purpose for writing about this today, right now. For many Nebraska librarians, these things are not new; to others, these ideas may be entirely foreign.

The Dude, like a number of other library users, loves the fact that he can obtain premium video content from the local public library, including original content from HBO, Showtime, and independent film sources. The Dude doesn’t have cable TV (but he does like to watch things occasionally), so he’s all about getting access to stuff and saving a few bucks. But the Dude is also sometimes frustrated by the current DVD format to deliver this content. Don’t get me wrong, my overall experience with DVD’s from my local library is almost 90% positive, but in 10% of those instances, it ends in despair. One of the major irritations lies in the DVD media format itself, and its inability to sometimes play correctly, either because it is worn, damaged, or otherwise messed up. Kid’s content is especially problematic. While there is something to be said for the convenience of checking out digital things (e.g. books, movies, music, etc.), it really isn’t burdensome to stop at the local library to pick something up and likewise return it. Some may be bothered by that, however, and that fact is worth noting. The library management may also be grieved by physical items coming up stolen or damaged, and that is also worth noting. Furthermore, there may be a significant portion of the library budget that is consumed by purchasing items that have already been purchased, in order to replace these lost, damaged, or stolen items.

The point is that a digital solution has the potential to stretch library budgets, more efficiently allocate services, and increase the overall availability of content to the library users. Take, for example, any particular DVD in the library collection. That DVD has to be selected, ordered, processed by technical services, labeled, and then eventually finds its way to the shelf, where if it is lucky it will take a trip to someone’s home (and back to the library in the same condition), or if it is unlucky, will take up valuable shelf space. It may get mis-shelved, or Benderized (reference to John Bender’s reorganization of the card catalogue in the Breakfast Club). If it does make it to the right spot, staff then hopes that some larcenist doesn’t swipe it outright, or that the first person (or the third, fourth, or fifth) to check it out doesn’t scratch it all to hell and render it useless. Even if the library staff catches this stratchtasticness, how easy is it to hold someone responsible? Hey, it was like that when I got it, man.

A digital solution to these dilemmas should not be overlooked. It holds much promise for the future of libraries, and should be considered in planning for future services and collection development. There are a few different digital alternatives worth noting, including but not limited to OverDrive, Hoopla, Indieflix, and Films on Demand. Keep in mind that this post seeks to describe the basic services, not necessarily to endorse one or another (none of them have bribed or even talked to me). Some of these services offer transactional pricing and content is delivered a la carte (e.g. Hoopla – currently being offered at the Hastings Public Library). In these cases, the library subscribes to the service and sets limits on what can, cannot, and how many items can be borrowed (either downloaded or streamed) by the virtual library visitor. For instance, the library can say each card holder can only have 3 audio and 3 video checkouts/downloads per month. The library can also say that once its budget disappears, everyone is shut off until the beginning of the next month. The library pays a fee per downloaded item (e.g. movies are between 99₵ and $2.99 on Hoopla), items are automatically returned after the lending period, and an unlimited number of users can access the content at the same time (no waiting for someone else to “return” the item). Hoopla is unique in that the library does not have any part in the selection of the content; that part is all done by the user. IndieFlix is a bit different, as libraries pay a negotiated rate for users to access the content. Again, no waiting for others to “return” the digital copies. The monthly membership for individuals is $5/month; I’m not sure what the rates are for libraries (it most likely depends on the service population). OverDrive streaming functions much like OverDrive eBooks, as the digital items are selected, rented, and need to be returned before someone else can check out the digital copy.

The obvious question or concern with streaming services is, of course, the ability to stream content purchased by the library in the home by many library users. In response to this concern, Fox Van Allen notes that approximately 17% of homes now rely on streaming media players for content, and by 2016, this number is expected to expand to 39% or more homes. So the trend is that appropriate devices will become more and more prevalent. It is also worth noting that with some services, there is an option is to download the video for later use (as opposed to streaming it), thus making it possible for someone to download the content while in a Wi-Fi hotspot (such as a library), and then watch it later. Also, in most cases the streaming needs to occur from a laptop computer or other device. So, if you want to watch these things on the big bad 70” LED in the basement, you’ll need to find a way to get the content over there. Shaka.

This entry was posted in General, Library Management, Technology, Uncategorized. Bookmark the permalink.