Posted on September 26, 2014 by Cathy Hatterman 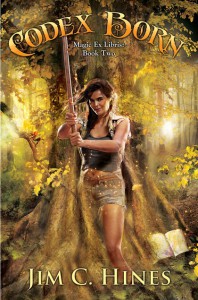 What if you could protect someone by pulling a ray gun out of the book Slan, by A.E. Van Vogt? That’s what Isaac Vainios of Codex Born, the book I’ve been reading, can do. He is investigating a murder by using a machine that views the past written in a short story called The Dead Past by Isaac Asimov (in his anthology, The Best of Isaac Asimov), which leads to an attack on his girlfriend. And the price of using too much of his book magic in too short a space of time, is losing his mind or his life. The characters are fun and irreverent, the action is fast, and I’ve thoroughly enjoyed as much as I’ve read so far. There are definitely adult sexual situations. Magic systems interest me, and this is one is a fit for librarians. Any book, as long as the person with the talent can concentrate, and imagine it, can draw any item out of a book. If the item is larger than the book when the book is open, it can’t be pulled through…usually. And of course, a lot can go wrong. There are of course, bad guys, and a force on the inside of the book world that is inimical to humans that Isaac calls the Devourers. Some of the side effects of the magic from the books is that there are several types of vampire—defined by the writers of the books: Sanguinarius Meyerii (a sparkler, from the Twilight trilogy), Sanguinarius Meadus (from the Vampire Academy novels), etc., with powers defined by those described in the books. There are other magical creatures as well: werewolves, dryads, golems, and more. Also a fun plus, the author includes a list of the books mentioned in the text, and marks the titles fabricated for the story. Included are references to A.E. Van Vogt’s Slan, Isaac Asimov’s The Best of Isaac Asimov, Robert Heinlein’s Friday, Randy L. Daly’s African Honey Bees in North America, and others. Codex Born, by Jim C. Hines, 2013, Daw Books, ISBN 978-0-7564-0816-9, Magic Ex Libris, Book Two.
This entry was posted in Books & Reading and tagged Friday Reads. Bookmark the permalink.