Don’t Forget the Back Part II 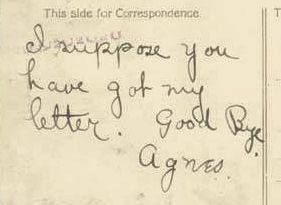 “I suppose you have got my letter. Good Bye. Agnes.” That is all that Agnes had to say to Mr. G. Greanbeam. Agnes sent that short message on the back of a postcard in the early 1900’s. I get the impression that Agnes is leaving a lot unsaid. This is just one of many postcards in Nebraska Memories that intrigue me.

In January of 2012 I wrote a blog post titled Don’t Forget the Back. It’s now two years later and I still like to take the time to read the back of the postcards in Nebraska Memories. I want to share with you some of my recent finds and issue you a challenge.

Reading the backs of these two postcards I’m assume two little girls wrote them. On the back of the postcard featuring the Bryan Hammer Bldg. in Omaha is a short note from Margaret to her grandma asking her how she is. On the other card showing the fountain in the Brandeis Stores Rhoda wrote a note to her Aunt Etta. Rhoda told her that “I am a big girl I love you very much your little girl Rhoda”. 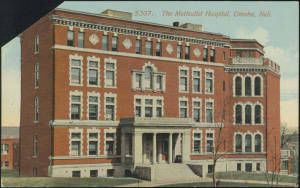 This next postcard of the Methodist Hospital, Omaha, Neb. was never mailed so we have no idea when or who wrote this cleaver saying on the back: “‘Hospital’ Where people who are run down, wind up!”

In October of 1911 someone with the initials CAM wrote to Miss Suzie Mathis in Swanton Nebraska. (For those of you like me who have not visited Swanton it is located about 50 miles south and a bit west of Lincoln.) CAM wanted to let Suzie know that all is well and that Russell had been in the hospital. “He has Varicose Veins in his right leg. 3 Dr’s worked on him 2 1/2 hours & took out 12 ft. of veins. he seems to be doing well but is feeling very sore”. Do you really think she meant 12 feet? I can understand why Russell was a bit sore.

With this last postcard I’d like to issue a challenge to everyone. What private message is Robby sending to his Sweet Heart Miss Blanche Shanklin with all of these letters? Here is the text of the postcard: 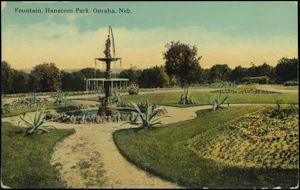 Gillette wyo April 24-13
Dearest Sweet Heart Thurs noon
this is a beautifull day but looks a little cloudy in the west I dont feel very good today and awful lonesome G.B.Y.D.H.I.D.W.Y.W.A.M.H.&.S.YAAJWTMC I sure will be glad when I start back for Sunny Brook and I don’t think it will be long either I will write when I get to Billings IAYODEJH Robby Pal

What do you think all of those letters mean? Don’t forget that this postcard was written in 1913. Leave a comment with your best guess. Maybe if a number of folks contribute we can decode the message. I don’t want to influence your interpretation of the message so I’m going to wait until next week to leave my best guess in the comments.

One Response to Don’t Forget the Back Part II