#BookFaceFriday is being blown away by Nebraska’s new State Poet! 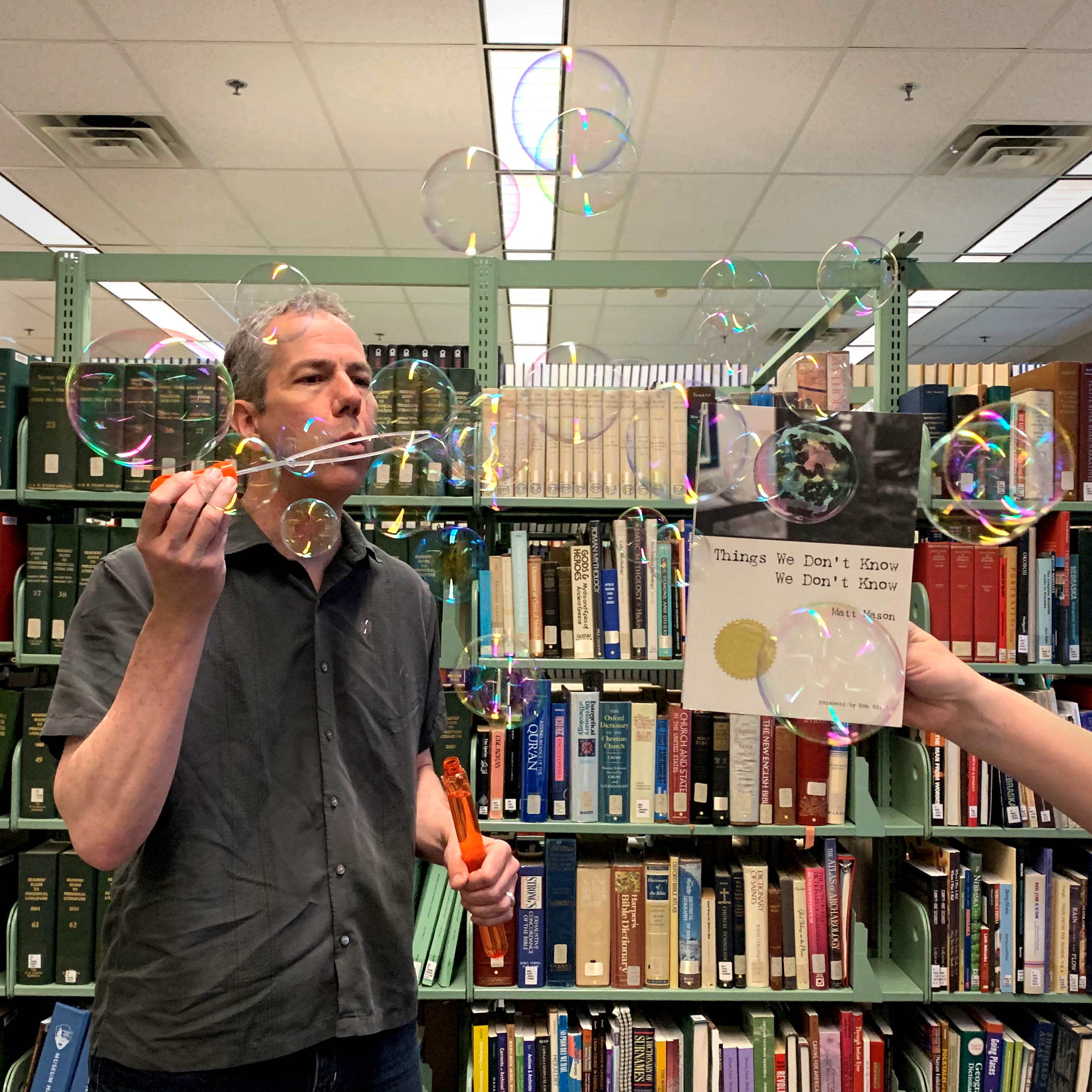 Matt Mason, Nebraska’s recently proclaimed State Poet for the term of 2019-2024, visited us to chat about poetry and his new role on this week’s NCompass Live webinar. Check out the recorded show, “A Conversation with Nebraska’s New State Poet, Matt Mason” in our NCompass Live archives. This week’s #BookFace highlights “Things We Don’t Know We Don’t Know” by Matt Mason (The Backwaters Press, 2006.) If you haven’t read any of Matt’s poetry yet all we can say is “DO IT!” Take a peek at page 42 and read “After the 1996 Fiesta Bowl” and then watch Matt perform it on NCompass Live. You will not be disappointed with this Nebraska Book Award winning poetry collection!

“The only thing better than reading these poems is to hear Matt Mason himself read them.” –Marjorie Saiser

This week’s #BookFaceFriday model is the author himself, Matt Mason!

Fun Fact: This book’s cover photo is by John Spence, who Matt used to work with. Matt knew he was a photographer and asked if he had photos which might go with the book. As they went back and forth, he mentioned that Bill Kloefkorn’s first printing of his first book had a photo of Spence’s on the cover. For those of you who aren’t Nebraska poetry buffs, Kloefkorn was a past State Poet of Nebraska.

Love this #BookFace & reading? We suggest checking out all the titles available at Nebraska OverDrive Libraries. Check out our past #BookFaceFriday photos on the Nebraska Library Commission’s Facebook page!

The Nebraska Library Commission, the Nebraska Arts Council, and Humanities Nebraska are seeking nominations for the next Nebraska State Poet. This designation recognizes and honors a Nebraska poet of exceptional talent and accomplishment. Nominations must be submitted no later than midnight, CST, on August 1, 2018.

Nominations may be made by any organization or individual in the state of Nebraska. To be considered, nominees must consent to the nomination. All nominations will be reviewed by the State Poet Selection Committee, which is made up of five individuals who are established members of Nebraska’s literary, cultural, and academic communities. After the committee selects finalists, the governor will make the final selection.

State Poet nominations will be collected and reviewed online only. The first step is to contact Humanities Nebraska at info@humanitiesnebraska.org to verify the poet in question has not been nominated already. The remainder of the application is completed using the Nebraska Arts Council’s SlideRoom online application site. The site includes complete instructions for submitting application materials.

The Nebraska State Poet will be chosen based on artistic excellence, exemplary professionalism demonstrated by significant publications and special honors, an established history of community service in the advancement of poetry in Nebraska, and the ability to present poetry and interact effectively with a public audience. In addition, the State Poet must be a legal, full-time resident for at least three years prior to the application deadline and must maintain Nebraska residence during his or her full term of office.

Once selected, the Nebraska State Poet will serve a five-year renewable term as an advocate for poetry, literacy, and literature in Nebraska. Duties include giving public presentations and readings, leading workshops and discussions, and providing other outreach in schools, libraries, literary festivals, and various venues in rural and urban communities throughout the state. To accomplish this, the State Poet will join the Nebraska Arts Council’s Nebraska Touring Program and the Humanities Nebraska Speakers Bureau.