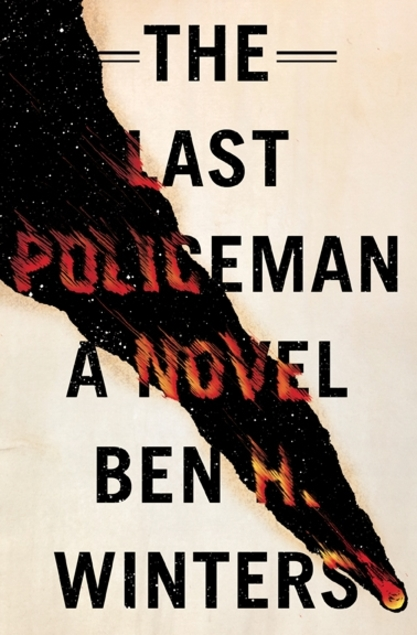 In six months’ time, an asteroid is going to slam into the Earth, ending all life as everyone knows it, and Detective Hank Palace just wants to do his job. Peter Zell – actuary, ordinary, quiet man, fellow-waiter-for-the-End – is found dead in a McDonald’s bathroom. Suicide, of course. It must be, because all over Concord, and all over the world, people are killing themselves in a preemptive epidemic – it’s the end of the world, and things are beginning to get bad, and they’re only going to get worse before – BAM! – so why not get it out of the way sooner rather than later? Only Hank – who wanted to be a detective since he was a kid, now, finally, has the chance; all around him people are walking off their jobs, because who wants to clock in when death, confirmed in odds and orbit is hurtling on a direct and unstoppable path towards your species’ sole habitable planet? And those people happen to include detectives, which means rookie cops get promoted years early, making Hank the luckiest, unluckiest man in Concord, depending on your perspective; hey kid, you made it, sorry about the asteroid. Ain’t the just the old sting of existential dread that comes with being a Millennial? – Only Hank isn’t so sure Peter Zell killed himself. Hank, still mostly bright-eyed, still dedicated, with Farley and Leonard’s Criminal Investigation’s textbook memorized, is pretty sure that Peter Zell was murdered. The Last Policeman is not your everyday detective novel. The elements of a typical mystery are there: the suspects, the clues, the red herrings and the twists, the suspense that moves quick enough to have your spine straightening and your eyes brightening with quickened interest; did we get ‘em, did we figure it out? Remove the asteroid and you have a standard detective story: was a man murdered, and for what? Depending on who the man was, maybe there’s less dragging of feet. Put back the asteroid. Now a man is dead. Maybe murdered, maybe not; does it matter? To Hank, it matters. He wants to know the story (175). He wants to do his job; a man is dead and that matters, even though they’re all going to die. I love a good detective story, and if there’s a good, solid human element mixed with a literary style, then I am sold. Winters crafted a doomed world but kept Hank’s chin up enough despite, as one character calls it, “the weight of all this unbearable immanence” (39). It’s a complicated, bittersweet novel that surprised me by having bright moments of humor. Since it is the first in its trilogy, it left some threads dangling, and I am curious to see how Winters develops those plotlines. It is interesting to start a series where the end is pretty much a given – and not a particularly, one must assume, happy end. There was an element of denial I found myself falling into as I read. Because I – like Hank, like everyone – don’t want it to end like that.  Which creates a fascinating connection between the characters and the reader: to hope, in that ever-irrational, ever-human way, for an impossible way out; that somehow, someone failed to carry a one somewhere and threw the entire model off course; that at the last moment the asteroid is going to veer away and the disaster will be averted and we will all go on living.   The Last Policeman is followed by Countdown City and World of Trouble. Winters, Ben H. The Last Policeman. Quirk Books, 2012.
This entry was posted in Books & Reading and tagged #FridayReads, Friday Reads. Bookmark the permalink.