Friday Reads: (Another) Year in Review

As we begin the countdown to 2019, the Nebraska Library Commission is looking back at all the great books we’ve reviewed in 2018!

In our weekly blog series Friday Reads, a staff member at the Nebraska Library Commission posts a review of a book every Friday. Spanning all genres, from short stories to celebrity memoirs, young adult to crime fiction, we’ve shared what we’ve read and why we’ve read it.

Former NLC staffer Laura Johnson created this series to model the idea of talking about books and to help readers get to know our staff a little better. Readers advisory and book-talking are valuable skills for librarians to develop, but they are ones that take practice. We hope that our book reviews will start a conversation about books among our readers and encourage others to share their own reviews and recommendations.

The series has been going strong for 4 1/2 years and has produced over 200 reviews, which are archived on the NCompass blog, or you can browse a list of reviews here.

Save the Date for Fall Book Festival

Nebraska books and writers will be featured and celebrated at the Nebraska Book Festival on August 25, 2018. This event will highlight work by Nebraska writers and publishers, with a focus on stories and poetry set in Nebraska.

The August 25 Nebraska Book Festival will be held at the University of Nebraska City Campus Union from 9:00 a.m.-6:30 p.m. It will feature author appearances, book signings, exhibitors, booksellers, poetry readings, and hands-on family activities. Authors include Janice Harrington, Stew Magnuson, Brandon Vogel, Melissa Fraterrigo, Jeff Kurrus and Michael Forsberg, along with Nebraska poets from the 2018 One Book One Nebraska selection Nebraska Presence: An Anthology of Poetry. The Nebraska Writers Guild will feature readings, discussions, and workshops for writers. Concierge Marketing will host Maker activities to celebrate books, including family activities  to encourage book lovers of all ages to craft, draw, imagine, and create.

The Nebraska Library Commission’s Talking Book and Braille Service celebrated the work of our volunteers at a luncheon on April 18, 2018. Volunteers are indispensable in serving Nebraskans who use Talking Books. Of the 35 active volunteers, many record magazines and books of regional interest. Others prepare national books for check out.

The Nebraska Library Commission’s Talking Book and Braille Service thanks all the volunteers who play an integral part in serving Nebraskans with disabilities. We provide free audio books and magazines and braille reading materials. Nebraskans receive reading selections through the mail or digital download. The service is available to individuals with a visual or physical condition, or a reading disability, which limits the use of regular print. 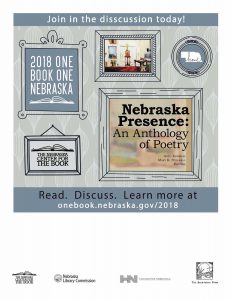