All smiles for this week’s #ThrowbackThursday!

This 3-5/8″ x 4-3/4″ black and white acetate negative shows five baton twirlers leading a parade in Columbus, Nebraska in 1939. This image is published and owned by The Durham Museum.

If you like history, check out the Nebraska Memories archive. It is a cooperative project to digitize Nebraska-related historical and cultural heritage materials and make them available to researchers of all ages via the Internet. If your institution is interested in participating in this project, see http://nlc.nebraska.gov/nebraskamemories/participation.aspx for more information. Nebraska Memories is brought to you by the Nebraska Library Commission.

This black and white photograph from the 1890s shows an unidentified bridge, thought to be looking west over the Missouri River toward Omaha from Iowa.

This image is provided and owned by the Omaha Public Library. The items from this collection on Nebraska Memories include early Omaha-related maps dating from 1825 to 1922, as well as over 1,000 postcards and photographs of the Omaha area.

Want to see more Nebraska history? Check out the Nebraska Memories archive to search for or browse through many more historical images digitized from photographs, postcards, maps, lantern slides, books, and other materials.

Nebraska Memories is a cooperative project to digitize Nebraska-related historical and cultural heritage materials and make them available to researchers of all ages via the Internet. The Nebraska Memories archive is brought to you by the Nebraska Library Commission. If your institution is interested in participating in Nebraska Memories, see http://nlc.nebraska.gov/nebraskamemories/participation.aspx for more information.

Looking at the Postmarks 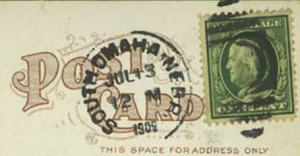 Let’s start with the basics first. Most, if not all of the postmarks that I’ve looked at in Nebraska Memories include the day, month, year and time of day along with the name of the town. The postmark above is on the back of a postcard of the Hanson’s Café. You can see that it was postmarked on July 13, 1909 at 12 midnight. This card was sent from South Omaha, Nebraska. In 1909, South

Omaha was its own town. South Omaha was annexed by Omaha in 1915. On a side note, I always like it when I can connect unrelated items in Nebraska Memories to each other. In this case, there is a postcard of the South Omaha Post Office in the collection. The post office building was completed in 1899 so it’s possible that the postcard of Hanson’s Café passed through that building. The post office building is still being used as a post office today.

Some postmarks contain more information. The image on the left is the postmark on the back of the Omaha Boulevard, South West, Omaha, Nebraska card. Do you see where it says Union Depot Postal Site? I think the last word is “site” it is hard to read. I’m assuming that means the card was cancelled at the Union Depot.

This postcard of the state capitol at night was postmarked On Mary 14, 1912 at Station C in Lincoln. I know Station C doesn’t mean a lot on its own but I checked a few of my favorite research sources and found just what I was looking for in the 1918 Lincoln City Directory.

Another interesting postmark I ran across was the received postmark. It appears that some items were marked as received when they reached their destination. I was curious to see how long it took a postcard to reach its destination in the late 1900’s so

I put together the chart below. It shows the date, time and location of both postmarks. For the last column, I wanted a general idea of the distance between the two locations so I used a map to find the shortest distance. I was surprised to see how quickly the cards reached their destination. (Click on the town names listed in the Mailed From column to see the postcards.)

The last type of postmark I want to highlight is the RPO postmark. RPO stands for Railway Post Office. I didn’t know anything about RPO until I started doing some research for this blog post. I learned that mail clerks road on the train and sorted the mail as they went and it was a dangerous job. If you would like to know more about railway mail service, the Smithsonian provides a great history of the service. 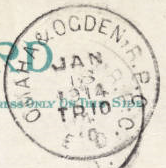 There are two postcards in Nebraska Memories that have RPO postmarks. They are both for the Omaha & Ogden (Utah) route. The postmarks contain the date and time information along with one unique piece of information. The postmarks also include the train number. An article in the Jan 1909 edition of the Omaha Bee 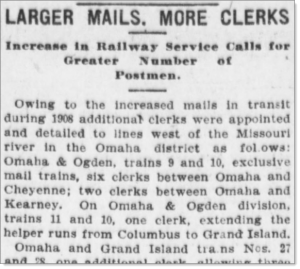 talks about how the increase in mail required more clerks on the railroad lines west of the Missouri river. To the left is first paragraph of the article that talks about the Omaha & Ogden route.

I hope you enjoyed learning about a few of the different postmarks. Visit Nebraska Memories to search for or browse through many more historical images digitized from photographs, negatives, postcards, maps, lantern slides, books and other materials.