Friday Reads: The Woman in the Window, a novel by A.J. Finn 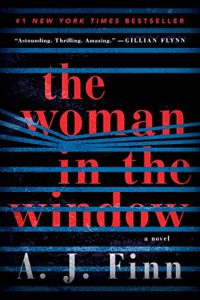 Shortly after I started back in April I was asked if I wanted to contribute to the commissions “Friday Reads” blog and of course I said “Yes!” And then I froze. I had been moving so I haven’t read anything in a while! Nothing I had with me seemed to work and nothing recently seemed intriguing. So after some (okay…a lot!) of browsing I finally came across “The Woman in the Window” by A.J. Finn. It mainly caught my eye as my cover says “Soon to be a major motion picture” and I’m the type of person who always has to read the book first. Rarely is a movie better than the book but with this one we’ll just have to wait and see.

Told from the perspective of one Dr. Anna Fox who, due to her battle with agoraphobia, has spent the last ten months in her house having what she can delivered so she never has to leave. She keeps tabs on her neighborhood through the lens of her camera and “see’s something she shouldn’t”. I’ve never seen “Rear Window”, or much of it at least, but it seems like there are a number of connections that can be made between this book and the movie. A person trapped in their home thinks they see something nefarious and people don’t believe them. The connection is made even stronger through Anna’s own love of old movies, including “Rear Window”, which are referenced throughout the book.

As for the rest of the characters A.J. does a good job fleshing each of them out but I hate to say it – he does nothing with them. Most of them have very little connection to the plot and you never really get to know any of them well. Unfortunately, you never really get to know Anna very well either as major parts of her story, and why she is the way she is, aren’t revealed until you’re ¾ of the way through the book. Thankfully the book redeems itself in other ways and really is a quick read. The “chapters”, some of which are only a page long, are grouped together by date and the flow that this gives the book never waivers. Plus, the way AJ writes really gives you an almost visceral feel for what’s going on (hence the reason I feel that if done right the movie might out shine the book.)

I wouldn’t recommend “Woman in the Window” to hard core mystery buffs, but other than that I found the book enjoyable. I normally don’t like mysteries as I find it frustrating that I usually figure it all out only sentences before the characters do. “The Woman in the Window” is more suspense story than a true “who-done-it” type of mystery, though, and it keeps you on your toes by throwing twists and turns at you constantly making you, and Anna, question if your reasoning is correct. With that being said in the end I was able to figure out the “who” well before it’s revealed in the book.

This entry was posted in Books & Reading and tagged #FridayReads, Friday Reads, Reading. Bookmark the permalink.