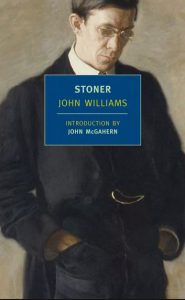 This book is a bit of false advertising, as it is nothing like the title suggests. Nevertheless, I did stick with it, after learning that Stoner actually is a reference to William Stoner, the main character in the novel by John Williams (1922-1994). The book was originally published in 1965. Stoner tells the story of William, born and raised on a small farm in Missouri, who eventually goes off to Columbia, MO to college. The original plan is for Stoner to complete a degree in agriculture, and then return to implement his knowledge for the benefit of the family farm. However, while in Columbia, Stoner develops an interest in literature, eventually earning his Ph.D. and subsequently teaching at the University in Columbia. While Stoner tells the semi-interesting story of his lackluster marriage, his relationship with his daughter, and life teaching English (including faculty relationships and conflicts), it is really more about his stoicism.

After reading more about stoicism, it sounds great in theory, but after reading Stoner I’m not buying what the stoics are selling. For some filler material, I also read a bit of the well-known stoic and Roman emperor Marcus Aurelius (121 – 180 AD), whose book Meditations is a mix of hell yes (“The more we value things outside our control, the less control we have”) and fortune cookie philosophy (“The best revenge is not to be like your enemy”). I dunno, sometimes it seems as though revenge along the style of Ray Donovan or Donnie Yen seems appropriate. Depends on the circumstances I suppose. OK – back to the stoics. Generally speaking, the stoic endures hardship or pain without feelings or complaint, and this is exactly the life of Stoner, sans a few very brief moments of joy and happiness. However, after reading Stoner I realized something I had not thought of before or maybe did not see. And that is that the stoic life seems to not only suffer through hardships without complaint (dispassionate), but to also be void of any passion. Let’s face it — sometimes I like to be passionate about the fact that I’m dispassionate about certain things. And that I think is where Stoner falls short, at least on a philosophical level. On a literary level, it’s an OK read, but man you really come away thinking that Stoner is a real sad sack.