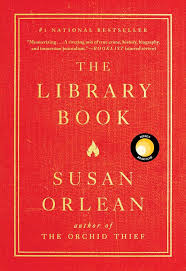 The Library Book by Susan Orlean is a necessary and fascinating read for anyone who has used a library—even more so for anyone who works in a library. Orlean tells the story of the Los Angeles Central Library, its founding and its operation, and about a dramatic 1986 fire and the following investigation. Of special interest to Nebraskans, the building itself was designed by Bertram Goodhue, who was also the architect for another building you might be more familiar with: the Nebraska State Capitol building.

The way Orlean tells the story is as interesting as the investigation itself. The book is true crime, history, biography, and homage. She describes her own emotional connection to visiting her hometown library with her mother as a child, and then returning to libraries much later, after having a child of her own, and she begins to appreciate what an incredible societal wonder the modern library is.

Orlean also tells the stories of pioneers, free thinkers, and risk takers who made the Los Angeles Central Library possible, like Mary Foy, who became the head librarian of the Los Angeles Central Library in 1880, when men still dominated the field—and when she was only eighteen years old. With thoughtfulness and sensitivity, she talks about the emotional aftermath of the 1986 fire, for the workers and patrons of the Central Library, with personalized detail. She addresses the realities of the twenty-first century public library with respect and without sentimentality.

I dragged my feet finishing this book, because I didn’t want it to end. I knew from the formatting of the first page—I won’t give away how each chapter is introduced—that I was reading a book about libraries by someone who knew them and loved them.

If you’re old enough to remember 1986, but you don’t remember the Los Angeles Central Library fire, it might be because another catastrophic event happened a few days before in Chernobyl, which overshadowed the fire in the news. After you read the book, you might want to watch news clips and video of the time—and view other reactions to the book. The story told by the book has encouraged a reckoning and remembering by those affected, and it is powerful.

I took my copy of the book on a field trip to another library designed by Goodhue—in the aforementioned Nebraska State Capitol building. Pretty library photos will be on social media soon, and I will add a link here when that happens.

This entry was posted in Books & Reading, General and tagged #FridayReads, Friday Reads. Bookmark the permalink.